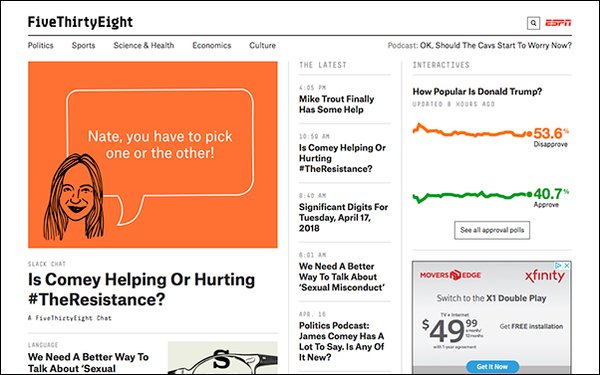 ESPN has sold the FiveThirtyEight site to ABC News.

FiveThirtyEight, which covers sports, politics and science, will continue to provide data-driven sports coverage to ESPN.

The new ownership means FiveThirtyEight will expand its political coverage under ABC News.

ABC News and ESPN Inc. are both divisions of The Walt Disney Company.

FiveThirtyEight editor in chief Nate Silver commented that James Goldston, president of ABC News, “has a real vision for how FiveThirtyEight can contribute to ABC’s news and election coverage, and we’re looking forward to building upon what we’ve created with ESPN.

"We’re looking forward to getting to work immediately as we prepare for the 2018 midterms.”

Publishers Dailyreported in January on ESPN’s intention to sell or spin off the FiveThirtyEight site in an effort to move away from political coverage and focus solely on sports.

FiveThirtyEight was purchased by ESPN in 2013. The site's traffic grew from 3.6 million unique visitors in March 2015 to 11.5 million a year later, thanks to the fever surrounding the 2016 presidential election.

Silver and the FiveThirtyEight staff will become a part of ABC's news division and appear regularly across ABC News.