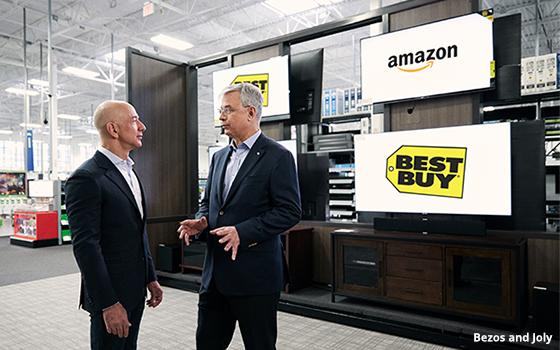 Amazon and Best Buy are teaming to bring the next generation of Fire TV Edition smart televisions to market in the U.S. and Canada.

Best Buy will launch more than 10 4K and HD Fire TV Edition models from Toshiba and Insignia starting this summer, according to a joint announcement by the companies.

“Amazon and Best Buy have a long history of working together, and today we take our partnership to a new level,” stated Jeff Bezos, Amazon CEO and founder. “These Fire Edition smart TVs by Insignia and Toshiba deliver beautiful visuals and all the movies and TV shows you love, with an experience that gets better every day with Alexa.”

The new televisions will come with Fire TV built in, so streaming content can be searched and executed by voice through Amazon Alexa. Other streaming services, such as Netflix, HBO, PlayStation Vue, Hulu, as well as Amazon Prime, will be included.

Fire TV also comes with a voice remote with Alexa and also can be paired with any Amazon Echo device, so the television also can be controlled there.

The first Fire TV from Toshiba is expected to be available in the U.S. this summer and in Canada later in the year.