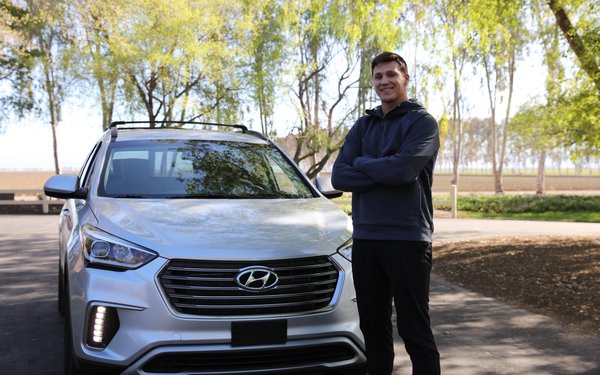 It might be the off-season, but that doesn’t mean fans aren't thinking about and talking about football.

Hyundai Motor America is capitalizing on that with the return of the second season of Rolling with the Rookies presented by Hyundai, a four-episode content series that brings athletes back home to visit the people, places and moments that defined their journeys.

The 2018 NFL Draft is the start of Hyundai’s fourth season as an official NFL sponsor and the league’s official car and SUV. It also has partnerships with six teams, including the Arizona Cardinals, Houston Texans, Los Angeles Rams, Miami Dolphins, Minnesota Vikings and Pittsburgh Steelers. Hyundai’s NFL Draft content and activation is managed by Advantage.

Hyundai filmed an episode with each player in his hometown and talked to his family members, coaches, friends and teachers who helped catapult him to greatness.

Each player also worked with well-known cleat designer Marcus Rivero, SolesbySir, to design a one-of-a-kind wrap for Hyundai’s all-new Kona that told his story visually on the vehicle. Each design was also mirrored on a pair of custom cleats.

Hyundai will distribute the content on its own website and social media channels, and through a multi-platform distribution strategy driven in partnership with digital sports publisher and consultancy, ThePostGame.

The journey these athletes took to get to this point is what makes the NFL Draft one of the most compelling days in sports, said Paul Imhoff, director, Marketing Communications, Hyundai Motor America.

“Our objective as an NFL sponsor is to engage with fans, create compelling content and show how passion can make things possible,” Imhoff says in a release. “We were honored to tell these amazing stories and will be rooting for them on Draft Day.”

At the NFL Draft in Dallas, April 26-28, Hyundai will have an on-site activation at the 2018 NFL Draft Experience Presented by Oikos Triple Zero, a free-admission, three-day football festival held outside AT&T Stadium in Arlington. On display in the Hyundai space will be the four custom-designed Konas, exhibits highlighting footage from each player’s life and interactive fan engagement opportunities.

The four Rolling with the Rookies films can be found on Hyundai’s YouTube channel.