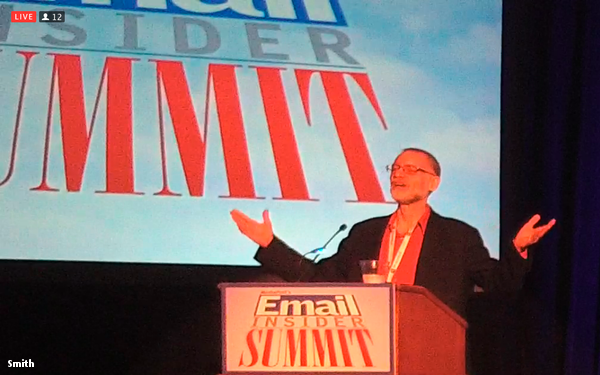 Fifteen years of emceeing summits about email marketing has taught MediaPost Vice President-Editorial Director of Events Steve Smith a thing or two about the art and science of the marketing discipline.

Marketing is beginning to morph into something else -- part of a bigger omnichannel, convergent marketplace, he said in his opening remarks at the Email Insider Summit in Captiva, Fla. The "customer is first" is more than a "buzzword," Smith said while outlining the agenda based on that theme at this week's summit.

“We know it really represents a confluence of forces that have occurred in two decades of digital that are finally coming together,” he said, adding that it raises a “a new context of expectations that we all have to meet,” including “new types of addressable media” and a shift away from simple consumer segmentations to truly understanding each brand’s consumers.

“Email should be at the center of it,” Smith suggested, cautioning that the discipline also faces challenges and needs to be rethought, if not retooled from a “century’s old mass-media mind.

“It’s not about your content, even thought content plays an important role here,” Smith cautioned attendees, adding, “It’s about what [customers] want from you now.”