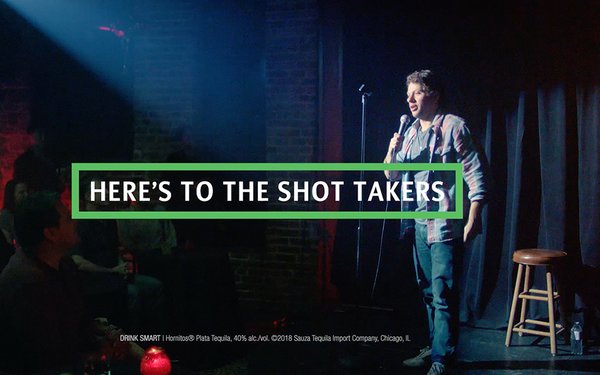 Hornitos tequila has releasd the first television spot in its multichannel “Shot Worth Taking” campaign.

The campaign, from The Community, debuted last year. Digital-only ads featured real young adults striving to establish careers in hip-hop, fashion design, stage production and stunt work, who were given financial support by the brand in return for doing the videos. The campaign also includes social media, print and out-of-home advertising.

Its first TV ad, “Here’s to the Shot Takers,” has 30-second (below) and 15-second versions. Launched on the evening of April 24, it will air through the summer.

The ad, like the larger campaign, celebrates “shot takers” — those who are willing to step out of their comfort zones because they know that achieving meaningful goals requires acting and taking risks. Vignettes show young adults daring to kiss a crush, perform on stage, and quit a job.

The final image, a bottle of Hornitos with a shot glass, connects the dots by bearing the anthem message, “A shot worth taking.”