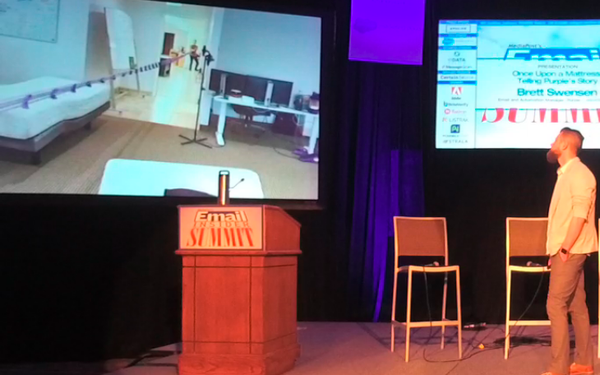 Who says there’s no room for a new brand in the increasingly cluttered mattress brand category? Brett Swensen, email and automation manager at fledgling mattress brand Purple, demonstrated how elastic the product actually is, both literally and figuratively.

During this morning’s keynote at the Email Insider Summit in Captiva, Florida, Swensen began with a video that showed a piece of Purple mattress’ “hyperelastic polymer” stretched as far as it could go. The material traversed two rooms in the company’s showroom before it snapped -- in ultra slow motion -- like a scene from a cinematic explosion.

“They found out how far it really stretches,” Swensen said, playing the explosive snapping sound over and over again.

Purple, meanwhile, has demonstrated the elasticity of the mattress marketplace too. Since its launch 2016, the company has grown by leaps and bounds and is now publicly traded, Swensen noted. He joined nine months after the launch, and said “it’s been just crazy since then.”

He attributed the company's success to some craziness, which manifests in the form of a series of hilarious videos it promotes through social media, paid search -- and, when people opt in, its outbound email marketing.

The videos all leverage humor and feature a series of rotating characters -- from Goldilocks to Sasquatch to sumo wrestlers -- who indirectly demonstrate the product’s scientific attributes via tongue-in-cheek and often cornball bits.

“We’re a video-first company,” he said, noting that Purple’s video content is viewed (in aggregate) for 17,520 hours daily on Facebook, and the company has generated 800 million video views to date -- including 1.5 billion social media impressions.

“You can see who are the golden children in our office: our paid team,” Swensen quipped, adding that outbound email marketing works most effectively in its mix when consumers opt in to the company’s CRM database, where content can be tailored to the relevance of the customer -- “telling better stories through email.”

He cited the example of a quiz that users can take on Purple’s website to assess their “sleep quality,” including questions about their age, how well they sleep, whether they drink or smoke, etc.

That data is then used to customize emails with content.

“All this data is passed through our CRM and CRE, and hopefully delivers a better experience with content that is relative to them,” Swensen said, emphasizing that while the execution focuses on storytelling, the results of emails with subject lines like “The mattress industry’s dirty little secret” are bottom line.