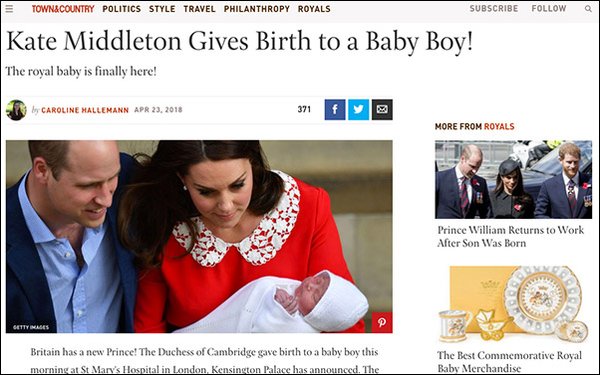 The happenings of the British royal family are big money makers. With the birth of Prince William and Kate Middleton’s third baby just days ago, and the wedding of Prince Harry and Meghan Markle on May 19, publishers are eager to connect royal content with an engaged audience.

At Hearst, the websites of Town & Country and Harper’s Bazaar have mastered the art of capitalizing on everything from weddings to births to TV events.

“Pippa Middleton’s wedding last spring taught us how to cover the royals in a way that really grew our audience,” Elizabeth Angell, digital director of Town & Country, tells Publishing Insider. “We prepared for that weekend, building posts weeks and — in a few cases —months in advance. Then we swarmed it the day of, posting dozens of stories on site and on all our social channels.”

Coverage of the royals delivered 1.6 million unique viewers in March at Harpers Bazaar, and 1.7 million for Town & Country, accounting for 27% of that site’s total traffic.

In March, both HarpersBazaar.com and TownAndCountryMag.com published a combined 150-plus pieces about the royal family, covering everything from announcements about the royal wedding cake to exclusive interviews with royal insiders.

Angell says of the brand's increased traffic: “We can operate at different scale, both in terms of programmatic revenue and the audience we can offer to our partners.”

Harper’s Bazaar has turned the popularity of its royals' coverage into partnerships and brand extensions. The digital team produces a popular Facebook series called “The Royal Watch,” with 420 million followers and an average of 15 million views per month.

Harper’s Bazaar is also partnering with Lifetime to share content around its upcoming movie: Harry & Meghan: A Royal Romance.

“Royals have over-performed for Bazaar.com since we launched our news desk four years ago,” Joyann King, Harper’s Bazaar site director, tells Publishing Insider. “Today, we prep our coverage ahead of time to ensure every possible angle is covered in real time, including staffing on-the-ground correspondents and palace insiders to report exclusively for our site and social channels.”

The brands collectively are planning to publish more than 250 pieces over the coming weeks, leading up to Harry and Megan’s wedding.

Social media editors for the brands will provide real-time commentary in addition to correspondents in the U.K.

Stellene Volandes, editor in chief of Town & Country magazine, says, “The special issues on the May 19 wedding allow us to share Town & Country’s expertise and relationships with royals around the world with readers and to capitalize on both the nostalgia for the glamour of the past and the excitement over a new wave of modern royals.”

Volandes adds that advertisers are “keen to be a part of that royal effect,” whether that means reaching readers eager to wear Kate Middleton’s L.K. Bennett nude pumps or buy Princess Charlotte’s blue dress, which sold out in minutes.