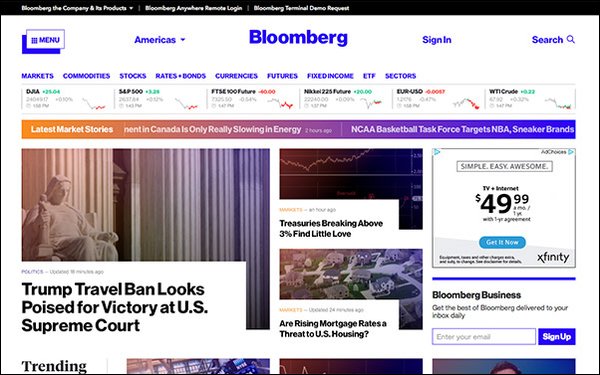 Bloomberg reportedly plans to test a digital paywall, starting as early as next month.

The paywall will coincide with a relaunch of Bloomberg.com, according to Business Insider, which first reported the news.

The All Access option includes all digital benefits, plus the weekly print magazine, quarterly conference calls, and live-streams of key events, for $87 a year in the U.S.

Bloomberg also has its Terminal subscription offering, which includes the company’s software that analyzes financial market data. Annual subscriptions to Bloomberg Terminal start at over $20,000 per user.

“We’ve tried to focus on smart, clever people who have more money than time on their hands,” John Micklethwait, Bloomberg editor-in-chief, told Financial Times back in 2017. “We know that from the terminal, from what Bloomberg has achieved, [the goal] is to find people who are willing to pay money to get very high-quality information and journalism. That’s what we’re trying to replicate.”

Bloomberg joins a number of publishers looking to find those same people. The New York Times, The Washington Post and The Atlantic have metered paywalls. Just yesterday, Vanity Fair put up its own.