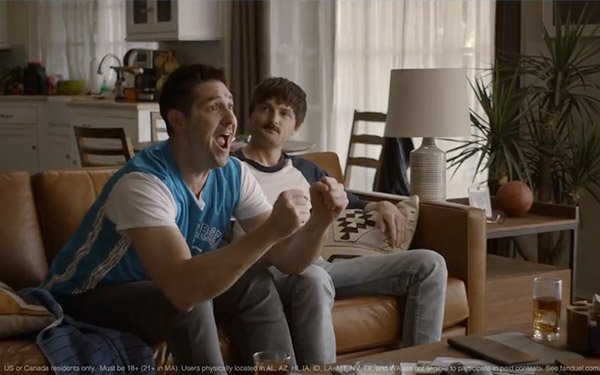 Fantasy sports game provider FanDuel has launched a new ad campaign and is increasing media spending during this year’s NBA playoff period because for the first time the firm is offering single-game contests around post-season play.

The creative—developed with VaynerMedia—centers around the "John Moreways" player as two TV viewers discuss FanDuel's 'more ways' to play.

The ‘more ways’ includes new sports like golf, expanded contests and additional ways for participants to win on the site. The ads end with the incentive that new players receive a $100 bonus with their first deposit.

The ads appear across major broadcast and cable networks, including ESPN, NBC, CBS, and NBC Sports.

"We are continuing to shift heavily from what was a direct response approach to one that focuses on what actually resonates with sports fans and emphasizes the array of fantasy game options for users across the spring sporting calendar," says a FanDuel spokesperson. This campaign also sets the tone for further brand work to come.