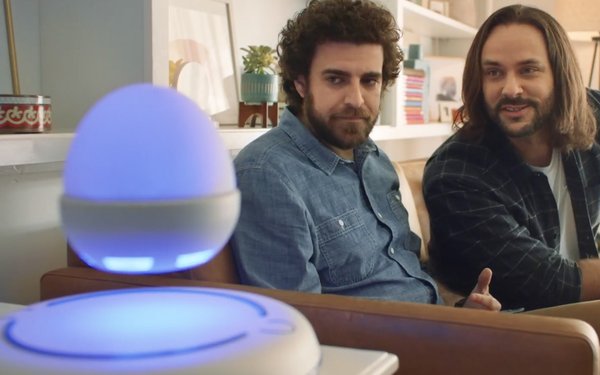 Don’t ever entertain the possibility of hitching your product’s new commercials to a dystopian society, said no marketing person ever, but Sonos is jumping at the chance.

The wi-fi speaker company will take over the second-season premiere of Hulu’s “The Handmaid’s Tale” on Wednesday. That’s a good get in itself because of the acclaim and awards the first season garnered. But the Big Brother-like setting in impersonal, state-controlled Gilead seemed perfect to advertise the new Sonos One smart speaker that works with Amazon’s Alexa to help with all those tasks she can do but also, and perhaps primarily, as a high-quality, music-worthy sound system.

“The spots are meant to complement the dystopia of Gilead by highlighting the foibles of the ‘smart home’” Dmitri Siegel, vice president of global brands, tells Marketing Daily.

True enough. The sound from smart speakers like Amazon’s Echo will never shatter a wine glass.

One of the two new Sonos One ads, both from the New York City agency Anomaly, show a hassled woman who is figuratively chased around her home by a smart assistant’s voice. When she asks for her morning playlist, instead she gets a tinny, mechanical voice telling her, “Cheryl, remember to order cleaning supplies” from one smart speaker and “Your laundry is ready, Cheryl!” from another.

Racing through another room trying to get away, she comes upon the mounted deer head in the den, it mouth glowing rhythmically. It says, “Talk to us, Cheryl” and other messages until the house is a cacophony of helpfulness.

That takes the ad to the Sonos tagline, “You’re better than this” and then shows Cheryl approaching her new Sonos One that works with Alexa. It produces clear sound when she asks for a song from Leon Bridges (also premiering with the ad).

Sonos, the ad concludes, is “the only smart speaker you want to listen to.”

(And on the flipside, Alexa is the only assistant the $199 Sonos One can deal with. But it will be compatible with Google Assistant and Airplay 2 starting sometime later this year.)

The idea, Siegel says, is for Sonos Ones to target smart speaker owners who might want to be reminded they need dog food and also want to listen to music.

“At Sonos we’ve spent over a decade obsessing about the listening experience,” Siegel says. “And yet right now we see the speaker category being flooded with devices that are called ‘speakers’  but which weren’t actually built for listening. These gadgets actually interrupt the listening experience because of all the other features they are designed to deliver, the closed nature of their software platforms and the subpar acoustic engineering. These devices are starting to clutter up our lives and complicate the simple act of listening.”

The second ad in the series shows one of those music lovers showing off “Serge,” his new futuristic  personal assistant-like speaker that can’t play his Spotify list, or Amazon or do much of anything else except look cool  Finally, his friend commands the device, “Serge, play silence.” After a few seconds of silence, the pal says, “It’s working.”

The ads will be the only tech-centered ones to play through the entire second season of “Handmaid’s Tale” and also show up on YouTube and roll out on other digital sites as well; it’s partnered with Hulu on paid social, too.

One interesting sound-specific add-on is that Sonos One will be featured on the “Handmaid” fan-centric “Red All Over” podcast, too.