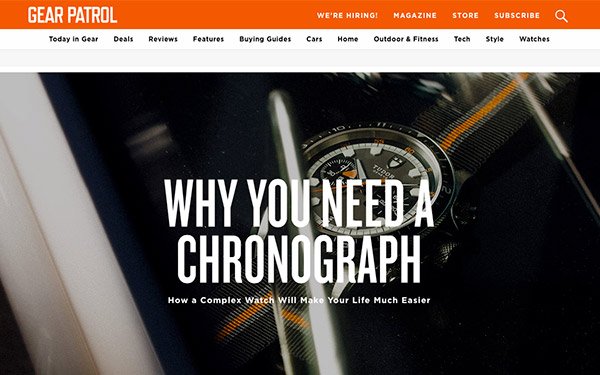 Hearst Magazines has acquired a minority stake in Gear Patrol, an enthusiast men’s brand focused on products and stories about the outdoors, fitness, style, tech, cars and travel.

Gear Patrol, which launched in 2007, reaches over 2 million readers monthly. The brand has a website, biannual print publication, advertising, branded content and events.

The financial terms of the deal were not disclosed. Gear Patrol will continue to operate independently.

Troy Young, Hearst Magazines Digital Media president, stated: “While we are a scale player, we value targeted and engaged audiences and the connecting power of enthusiast-focused verticals.”

For Hearst, the investment is also an opportunity to grow the publisher's existing ecommerce business, Young told The Wall Street Journal. Ecommerce currently makes up less than 10% of Hearst Magazines’ digital revenue. However, Gear Patrol has a strong content and commerce business selling products from watches to waterproof backpacks in its "Buying Guides."

Gear Patrol generates 25% of its revenue from ecommerce and affiliate links. When customers click direct links on the site to merchants like Amazon, the site gets a cut of the sale.

Ecommerce can represent a successful business for publishers, as it doesn't rely on digital advertising. In 2016. The New York Times Company acquired The Wirecutter, a gadget recommendation site that primarily generated revenue through affiliates.