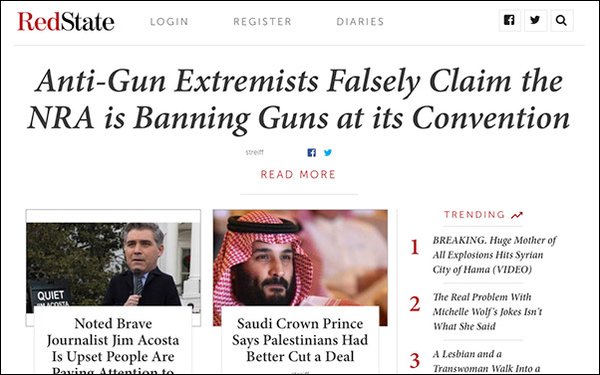 Conservative site RedState fired 10 writers and its editor Caleb Howe on Friday, due to financial constraints and strong criticism against President Trump.

Fired columnist Patrick Frey, writing under the pseudonym Patterico, wrote on Twitter: “When the message that will no longer be tolerated is criticism of the sitting President, that creates all kinds of problems for the site.”

RedState founder and former editor Erick Erickson, who now runs The Resurgent blog on TheMaven.net, explained in a blog post that RedState writers were working under contracts and paid based on the traffic their posts reigned in.

"Most of those on the expensive contracts were tossed,” Erickson wrote.

Of those writers who were working under contracts with a lower rate, "it seems the dividing line was loyalty to the President,” Erickson added. “In fact, among those under the expensive contracts, I'm aware of some writers having near equal traffic generation, and those insufficiently loyal to the President were fired.”

This was a sentiment echoed by a number of former RedState writers.

The site had drawn around 7 million or 8 million page views each month, Howe told The Atlantic, down from 10 million or 12 million a month during the election.

As a temporary measure to help those who were let go, Erickson encouraged fired RedState staffers to join TheMaven.net and The Resurgent's payroll.

Erickson left RedState in 2015, after 10 years at the helm. The site is now owned by Townhall Media, an arm of conservative media company Salem Media.

In response to the RedState layoffs, Erickson wrote an intimate piece about conservatives who shunned, threatened and harassed him when he refused to support Trump in 2015.