Message To Stormy, Her Lawyer, Trump, Everybody Else: Leave Us Alone 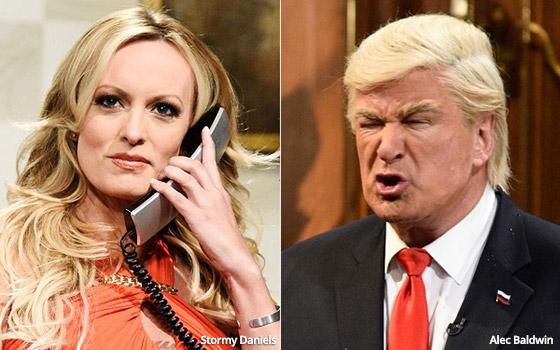 Don’t you wish they would all just go away and leave the rest of us in peace?

Let's start with Stormy Daniels and her lawyer, Michael Avenatti -- especially him. If there is a bigger media you-know-what (I dislike using the w-word in these kinds of contexts) on the scene today, I do not know who it is.

Suddenly, this lawyer who nobody ever heard of until recently is going around acting as if he is the chief, self-appointed leader of the hate-Trump resistance movement.

In one of the seemingly dozens of interviews he apparently has time to do almost every day, Avenatti told The Guardian over the weekend that he is certain President Trump will resign over the Stormy Daniels scandal.

“I don't know how he will ultimately spin his departure, but I firmly believe there is going to be too much evidence of wrongdoing by him and those around him for him to be able to survive the balance of his term,” Avenatti was quoted as saying in his new role as presidential historian and constitutional legal scholar.

He says similar things on TV, which cannot get enough of him -- Sunday public affairs shows, news networks, afternoons, prime time. He is everywhere you look. Why? Because he says yes.

Betcha didn't know that that's one of the main criteria for TV’s talking heads. The more a talking head says yes to the bookers and segment producers who call or email asking if they have time to appear that afternoon or evening, the more often they will be invited.

If there is anything I have learned about the overworked bookers on TV talk shows and news segments, it's that they love having a list of people who say yes because it makes their jobs so much easier.

And it doesn't matter in most cases if the talking head is an expert or not. Just getting him or her to appear is the real goal. No one really cares what then comes out of their mouths.

When it comes to talk show invitations, Avenatti is evidently a “yes” person. What any of this has to do with his role as legal representative and advocate for his client, Stormy Daniels, is anybody's guess. Of course, one guess would be the goal of self-aggrandizement for Avenatti.

Meanwhile, Stormy herself is evidently not the type of girl who says yes to every offer she receives. Where her lawyer is prolific in his TV appearances, demure Stormy is playing hard to get -- having agreed to interviews only on “60 Minutes” and “The View.”

On the basis of this performance on “SNL,” does Stormy have a future in comedy? Answer: No -- except as the subject of comedy.

As a veteran journalist myself, I certainly understand the news value of a presidential sex scandal, so we can hardly blame the news media -- biased or otherwise -- for their zeal at pursuing this Stormy Daniels-Donald Trump payoff story.

However, it is also possible to be sick of this story and everyone involved, up to and including the president. And despite Michael Avenatti's assertions to the contrary, President Trump does not appear to be going anywhere anytime soon.

Nor is it unreasonable to be frustrated at the news media that hammer away at this story at the expense of everything else that is (presumably) going on in the world.

All Trump all the time is leading to a condition of high anxiety over the state of our nation, and the TV news channels in particular are guilty of fanning the flames. Their propensity to exaggerate and oversell various news stories far predates the Trump administration.

The news channels have been in the exaggeration business ever since they decided that it was OK to slap a “Breaking News” or “News Alert” label on every story they do, as if every day was Pearl Harbor Day.

I recently heard someone use the phrase “PTSD” -- “President Trump Stress Disorder” -- which this person blamed at least in part on Trump himself, but also on the news media.

And in recent days, we have all borne witness to a new player strutting and fretting his hour upon the stage -- Rudy Giuliani, whose conflicting statements made him look as if he had lost his mind.

Thanks to media overload, maybe that’s what we’re all doing these days.

news, politics, tv
3 comments about "Message To Stormy, Her Lawyer, Trump, Everybody Else: Leave Us Alone".
Check to receive email when comments are posted.
Read more comments >
Next story loading