With Muslim Neighbor Episode, Roseanne Does It Again 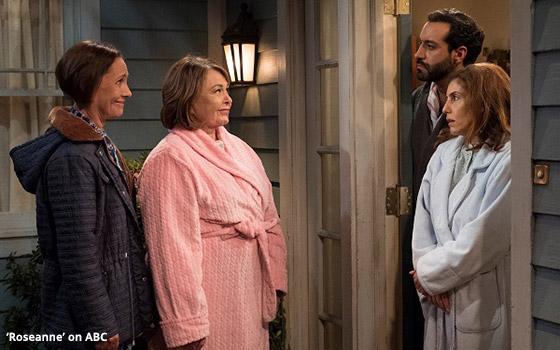 If there is a Profile in Courage Award for television, then this year's winner should be Roseanne Barr.

This week on her ABC sitcom, Roseanne took on yet another touchy subject and sank her teeth into it for all it was worth. In the aftermath, she was roundly criticized on social media, which doesn't seem to bother her one little bit.

She may have even anticipated the furor when she posted this tweet on Tuesday afternoon, about six hours before this week's episode of “Roseanne” was set to air on ABC: “I like to do TV episodes about REAL ISSUES & REAL PEOPLE. That's what I do. Next season will be even more current events -- I will challenge every sacred cow in USA.”

In this week’s episode, Roseanne Conner contended with the appearance of new neighbors who moved in next door. They are a Muslim family and Roseanne almost immediately concluded they could be terrorists, based primarily on a stockpile of fertilizer she observed on their property (fertilizer is reportedly an ingredient used in homemade explosive devices).

“Do you see the crazy amount of fertilizer they have piled up near their garage?” she asked sister Jackie (Laurie Metcalf) near the beginning of the show. “That's how they make bombs!” went the very unsubtle punch line delivered by Roseanne.

“What if this is a sleeper cell of terrorists getting ready to blow up our neighborhood?” Roseanne continued. “I’m telling you, this is what people from Iraq and Talibanjistan do! [Yes, she actually said this.] They hide out in neighborhoods like Lanford! Don’t you watch the news?”

That last question gave the show's scriptwriters an opportunity to slam Fox News. “You don't mean the news,” Jackie answered her. “You mean Fox News!”

As the episode went on, Roseanne tried to figure out her neighbors’ WiFi password by trying possible word combinations such as “Death to America” and “Death to America 123.” It turned out to be “Go Cubs.”

Roseanne needed a WiFi connection because the check she wrote to pay the monthly bill bounced following a financial shortfall. Why? Because husband Dan’s contracting company lost out to illegal immigrants for a job that the immigrants were willing to do for much lower pay.

In the telling of the Muslim-neighbor story, all of Roseanne’s remarks were met with pushback from Jackie and daughter Darlene (Sara Gilbert). And eventually, Roseanne got to know the new neighbors and accepted them. She even stuck up for one of them -- the wife -- when she was the victim of ethnic bias in a local supermarket.

The nature of the complaints about the show are by now predictable. A brash character in a scripted show says something that is supposed to be offensive in the context of a script and people who either see it, or hear about it secondhand, take to Twitter to voice their displeasure.

Such complaints have become reflex actions on the part of many people -- the very definition of “knee jerk.”

Rarely, if ever, is there any context to the complaints or any depth to them. In the case of this “Roseanne” episode, if depth or context were added to the tweeted complaints, the complaints themselves would fall apart.

Ultimately, the lesson this “Roseanne” episode seemed aiming to impart was that ordinary Americans such as some members of the fictional Conner family are capable of ignorance and the biases and prejudices that stem from it.

But they are also capable of getting over them too. In this show, “Roseanne” ends up sticking up for her new neighbor -- which in America constitutes acceptance.

With this new show of hers, “Roseanne” is on to something. She is turning a mirror on America, and the reflection is nothing if not complicated.