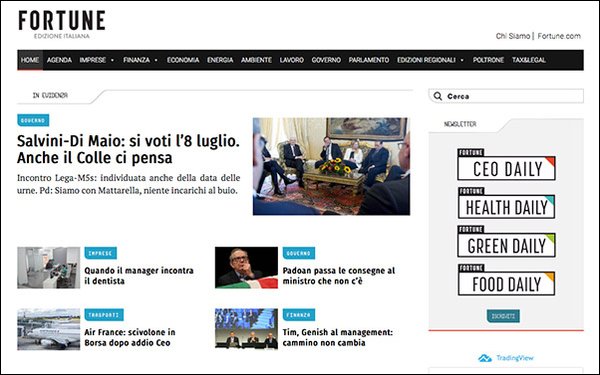 In late November 2017, Meredith Corp. bought Time Inc. Since then, the parent company has been deciding the fate of its acquired magazines.

Time Inc sold Golf, Sunset and Essence as it prepped to be acquired by Meredith. As of May 4, Meredith announced it had 150 bidders for Time, Fortune, Money and Sports Illustrated.

Media sources believe Fortune will be sold for $100 million, likely as a package with Money.

However, Meredith recently teamed with Magenta, a content factory, to enlarge Fortune’s global reach. The two launched Fortune Italy, which will be sold in Italy, Switzerland and Monte Carlo.

Published in Italian, the print edition goes on sale June 2.

Fabio Insenga, senior editor, will lead a staff of editors and 25 contributors and correspondents. Fortune Italy will include both original content and stories from the American edition.

In addition to covering financial and economic trends, Francesco Maria Avitto, Fortune Italy editor-in-chief, stated the publication would pay “great attention to sustainability and social and environmental responsibility issues and to new challenges in health and energy.”

Leonardo Donato, CEO, Magenta, added that launching the business magazine “completes our vision to introduce some of the most authoritative magazines in the world into the Italian market.”

Magenta is the licensee for Food & Wine, Islands and Maxim.