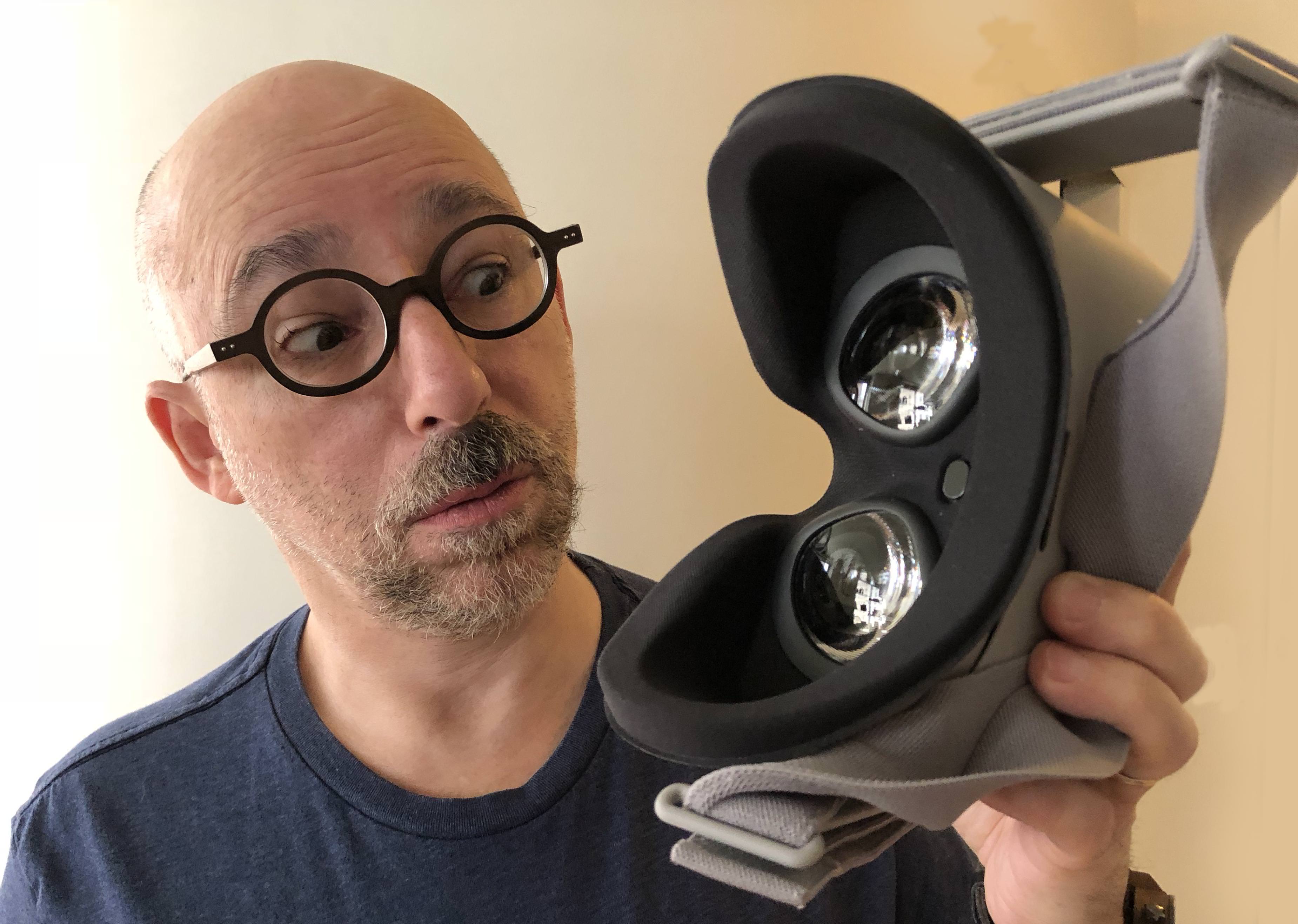 The author, with new Oculus Go in hand

Virtual reality has been on the verge of being a real thing for, well, years now.

Quietly, skeptics have uttered the phrase that puts a chill in all VR makers: ”3d video.” That’s the fear, that it’s a gimmick, not a glimpse into the future — that it will sell a bunch of gear, and then slip away into the tech graveyard.

The future is tricky in tech. You need hardware that works, compelling software, and a price point that breaks the early adopter barrier and gets to mainstream users.

Bit of personal honesty here: I’m Steve, and I’m an early adopter. My Google Glass sits gathering dust in the corner of my tech closet.

But I’m happy to say VR won’t have that ignominious end, thanks to a billion-dollar bet by, of all companies, Facebook.

After months of quiet expectation, Facebook released Oculus Go. Here are the top-line facts that matter to you:

What makes the Oculus Go such a  breakthrough hit is that it’s self-contained.

At launch Oculus Go has an impressive list of more than 1,000 titles. Right out of the box, you can log into Netflix, Hulu, or Showtime and get an immersive big-screen experience. Flatscreen manufactures should be quaking in their boots.

The Go screening room is fun, and once you share it with friends, watch together and chat, it mixes social in a way that’s seamless and impressive. Netflix and chill meets Facebook, indeed.

In the 360-video area there are a bunch of free offerings, including BBC VR, E Jurassic World, CNN VR and more.

In the games area, a bunch of free games to explore include Pet Lab, Spacewalk VR, Texas Hold em Poker, and Escape Mountain.

But don’t be surprised: unlike the early days of the Apple App Store, most of the best software in Oculus Go is paid offerings, with many priced at $7.99 and up.

And Oculus Rooms, Oculus Venues, Oculus TV and Oculus Gallery all offer a bridge between the world of Facebook and the VR world of Oculus Go.

Oculus Rooms gives you a platform to create a social space for family and friends in virtual reality. You can even create your own groovy avatar in the space. You can share videos and photos, too.

Room has the potential to be useful for business too — kind of a Skype conference call on steroids where you can share PowerPoints, graphics, even a shared whiteboard (not yet, but soon, I bet).

The Go will get a shrug from hardcore gamers. Why? Because, unlike some other upcoming stand-alone headsets like the Oculus Santa Cruz, the Go only supports three degrees of freedom, or 3DoF.  That means you can look around in 360, but can’t walk forward into 3D space as you can when using the Oculus Rift  which supports positional tracking.

There is a huge debate in the VR community if 3DoF is a good entry point, or a terrible mistake that diminishes the power of VR.

Some critics say Facebook has cut corners to meet the price point, but I’d suggest the company doesn’t want people walking around their living room in VR. Facebook is looking for an immersive experience, but a safe one. So sitting is far safer for a wide user base.

The Oculus Go’s speakers are built into a part of the strap that hovers near your ears, but doesn’t cover them, creating a cool surround-sound effect. And, if you choose, you can plug in headphones.

So, the big question: Should you?

Often, the first generation of a devices is for the dedicated early adopters. But here Facebook, which has had its share of missteps in hardware, made sure to get it right.

Remember the Facebook cell phone? This time, the company made sure this wouldn’t suffer the same fate.

By calling it Oculus, Facebook adopted a brand with vocal users base of serious VR gamers, who are not going to be excited about this new device. But you can ignore their indifference.

The Oculus Go is comfortable to wear. It works with glasses. It has two-plus hours of battery life. Its untethered experience makes it a winner. And at $199, it’s priced in a way that will invite the mass consumer electronics audience to jump into VR.

Order it today. Play with it tomorrow. You won’t be disappointed.

It’s time to retire Google Cardboard once and for all.