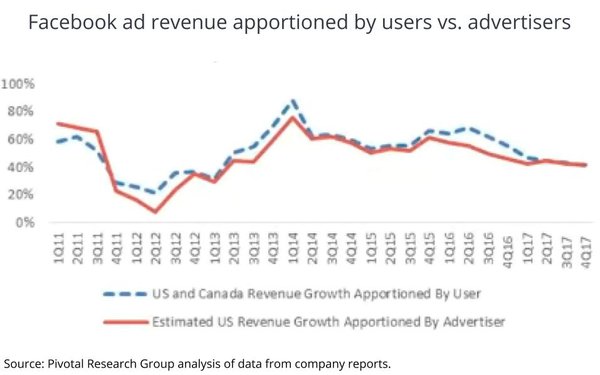 “Frankly, it blew my mind,” Pivotal Research Group's Wieser said of the finding -- which came when for the first time, Facebook reported data breaking down its revenue by the “billing address” of advertisers in four different regions, including China.

“And what the data tells us is illuminating to say the least,” Wieser said. Specifically, it showed about $5 billion in “outbound” advertising dollars being spent by Chinese brands to reach Facebook users in other markets -- principally the United States.

Wieser estimated the ad buys coming from China represent close to 10% of Facebook’s advertising revenue, and he noted that Twitter also alluded to the magnitude of China’s “export market” during its recent earnings call. He said he presumed Google was also benefitting from the Chinese advertising boom, but did not have data to estimate it.

He also said the disclosure suggests there is a “massively untapped market’ for other digital media companies to market to Chinese brands exporting to the West.

“It may be an opportunity for all sorts of media owners to find new money to bring into the United States,” he said describing the brands delineated in Facebook’s filing as either ones similar to conventional global brands or ones that are endemic to China (tourism and/or government).

During the briefing, Wieser also showed data revealing longer-term implications of two different ways that Facebook has been reporting its data for years: The ad revenue attributable to Facebook users -- which it reports in its quarterly earnings releases -- and its ad revenue attributable to advertisers’ billing addresses, which it reports in its SEC filings.

That data is highlighted in the accompanying graphic, but a deeper dive, including the implications of those differences, can be read in today’s Research Intelligencer, as well as more detailed breakdowns of Facebook’s and the other “duopolist,” Google’s, continuing dominance of overall digital advertising growth.

Wieser, for example, estimated that about 90% of digital’s impressive 21% growth rate in 2017 came from those two companies, and that the rest of the industry accounted for just 10% of the growth.