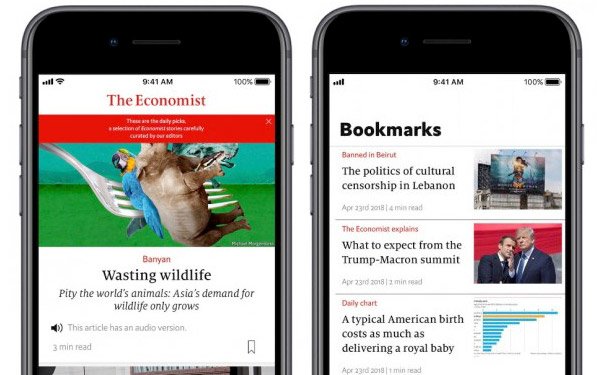 The Economist is introducing a new app for its digital subscribers - over 430,000 of them.

The app, called “The Economist,” has been “designed to improve the digital reading experience with the aim of building long-term value for subscribers,” according to the company.

The new app comes with a full audio edition to stream all print articles, as well as the full weekly edition of The Economist magazine.

The current app for subscribers — also available in the iTunes store for iPhone and iPad — will include articles from the print edition and Economist.com, curated daily by the magazine's journalists. The app also features the full edition of “Economist Espresso,” a standalone morning briefing app.

(There is already an app for non-subscribers called “The Economist Classic” that will continue to live in the iTunes store.)

“After listening closely to what our subscribers want out of an app from The Economist, we think we have created a new digital experience that will bring our audience closer to our daily and weekly content, ensuring they are able to quickly get to their favorite parts of The Economist each day on their phones,” stated Richard Holden, the product manager behind the new app.

His team asked hundreds of subscribers for feedback on potential new offerings; many were given access to the app in beta to give it a test drive.

“We wanted to build an app that solved real customer problems and pain points,” stated Denise Law, head of product.

Additional features will roll out on over the next six months, such as access to back issues, offline audio and other content.

The Economist has 1.4 million print and digital subscribers in total.

The Economist's circulation business is now the largest contributor of profits to The Economist Group, which is made up of The Economist, the Economist Intelligence Unit (EIU) and the Washington-based CQ Roll Call.

Last month,The Economist Group announced it was combining its sales and circulation teams, which will be overseen Michael Brunt, the newly appointed COO-publisher of The Economist. The combined teams will be called the Publisher Team.
apps, economy, magazines, mobile, politics
Next story loading