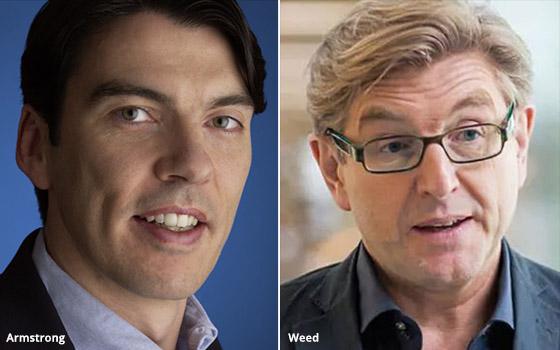 Tim Armstrong and Keith Weed are the latest executives to be identified as potential successors to former WPP CEO Martin Sorrell.

The Financial Timesreported earlier today that the two executives were in contention citing undisclosed sources with knowledge of the search process. The UK publication reported earlier that Dentsu Aegis’ Jerry Buhlmann and BBDO’s Andrew Robertson were also on the list of potential candidates to succeed Sorrell.

Armstrong is currently CEO of Oath, the Verizon unit that oversees AOL and Yahoo. The FT quoted a source as saying that Armstrong would be a good choice given that “he knows all about restructuring.”

Weed is head of marketing for packaged goods giant Unilever and has been a frequent and vocal critic over the past couple of years of inefficiencies and other problems within the digital advertising and marketing ecosystem.

Sorrell resigned last month about a week after the company said its board was investigating him for alleged “personal misconduct.” The company has been steadfast in its refusal to provide any detail about the allegations or what the board’s investigation turned up.

Since Sorrell resigned there has been a lot of speculation that WPP might sell off a number of companies—it owns hundreds of subsidiaries, including ad giants JWT, Young & Rubicam, Ogilvy and GroupM—or even be dismantled entirely.

Some investors reportedly believe the firm has expanded too far beyond its core competency. Research arm Kantar has been cited by analysts as a disposition that might improve WPP’s financials and please investors.

During a recent call with analysts to discuss first-quarter results, company chairman Roberto Quarta said that it was premature to discuss specific asset sales yet, although management will look at potential dispositions.

Quarta insisted that “the starting point is not a break-up” of the company, given the integration demands of clients.