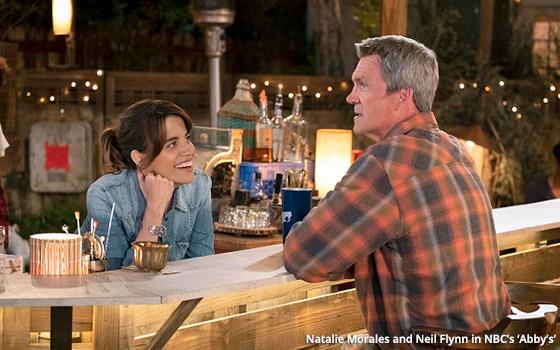 Technically, Burke was the first “live” act of the event. He was preceded by a pre-filmed song spoof about the upfront sung primarily by “Will & Grace” star Debra Messing, along with other NBCU stars and personalities.

In between Burke and Yaccarino, the audience saw dancers running up and down the aisles, a child ventriloquist who won “America's Got Talent” last year, the entire gold medal-winning U.S. women's ice hockey team, Seth Meyers, Andy Cohen and many other people whose names, if listed here, would suck up the TV Blog's daily word-count allotment.

“Here we go again, another upfront week,” Burke said, echoing my own sentiments when I realized recently that this is my 30th upfront season, which is more years than half of the NBC upfront audience has even been alive.

NBC Universal's one-word slogan for this year's selling season is “Unequaled.” Telemundo's is “Unstoppable.” USA Network's is “We the Bold.” Bravo's is “Beyond Demand. Obsession.” About that last one: I don’t get it.

Bravo did make some news with the announcement that “Project Runway,” which some years back ditched Bravo for Lifetime, is coming back. Bravo announced a whole bunch of home-renovation and design shows too, as if it intends to become HGTV.

Bravo also announced a scripted “limited” series called “Dirty John,” which is not about cleaning or sprucing up bathrooms. It is a drama adapted from a popular podcast.

The U.S. women’s ice hockey team came onstage in the portion of the presentation devoted to NBC Sports, which had the winter Olympics and the Super Bowl this past season. Speaking of the latter, the clip of the Eagles winning the Super Bowl was possibly the greatest moment of the whole upfront.

Of course, NBC has neither the Olympics nor the Super Bowl next season, which Seth Meyers pointed out in a hilarious monologue that also poked fun at past NBC stars Bill Cosby and Matt Lauer.

It was all in fun, but on the other hand, there is always plenty to pick on when it comes to upfronts. For example, take the two new shows announced by E!.

Clever titles (although the “Cavallari” title only sort of rhymes), but they made me wonder whether these personalities were chosen to headline these shows solely for the titles E! could make from their names.

Syfy announced two new drama series that looked good in the clips -- one called “Deadly Class,” which was about a Harry Potter-ish school that trains young assassins; and “Nightflyers,” an adaptation of a George R.R. Martin story first published in 1980. This show seemed to be about space travel, but it was not easy to comprehend from the clips shown at the upfront.

Christopher Meloni and Patton Oswalt came on stage to promote their Syfy drama series called “Happy,” which is not a happy show at all. Nevertheless, Meloni claimed the first season of the show late last year was Syfy's biggest launch in two years. I recall panning the show in my review here, but it’s like I often ask: What do I know?

As for NBC, the broadcast network announced two comedies and five dramas. One of the comedies, called “Abby’s” (picture above), is about an illegal neighborhood bar established in an urban backyard.

As a city dweller, I found this concept irritating. If they were my neighbors, they wouldn't get away with it -- one way or the other. As a TV critic, I wondered how this scenario can possibly be sustained.

A segment of the upfront was devoted to World Wrestling on USA -- which has had wrestling for decades. This segment honored three of the female stars of the wrestling world -- Charlotte Flair (daughter of WWE legend Ric Flair), Nia Jax and Ronda Rousey (former UFC star).

More power to them, but in my notes, I jotted this thought down during this overblown segment of the presentation: “It's just fake wrestling, for heaven's sake.”

The show closed with a loud and fiery dance number choreographed (and featuring) Derek Hough, formerly of “Dancing With the Stars” on ABC. In fact, the flaming pyrotechnics onstage were literally so hot that I took the opportunity to hightail it out of there before this dance performance was over.

Besides, I had already seen the upfront's main event, which was Yaccarino's summation in the presentation's penultimate portion. “Nothing reaches into people's lives like television,” she said, making the point that audiences engage with the TV shows they love like no other media.

She spoke persuasively about reach, brand safety, audience measurement and NBCU's ongoing efforts to cut the number of commercials and clean up the clutter. As always, she had me convinced. Where do I sign?