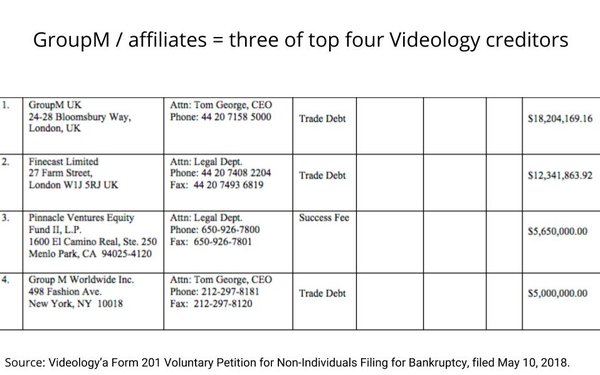 In a rare public disclosure revealing the financial relationship between a big agency holding company’s media operations and a digital media supplier, WPP’s GroupM is listed as the single biggest creditor in Videology’s bankruptcy filing.

Three of GroupM’s offices -- including GroupM UK, Finecast Limited, and GroupM Worldwide -- are listed as the first, second and fourth-biggest creditors, respectively, with claims totaling more than $35 million due the agency from Videology, a supplier of programmatic video advertising.

The filing does not detail why GroupM is owed money from Videology, but observers who are knowledgable about the relationship say at least so o me of it is attributable to rebates paid to GroupM for buying media through Videology on behalf of its clients.

GroupM is also listed in the filing as one of Videology’s significant shareholders, but it’s unclear whether GroupM made a capital investment in the digital startup or whether it received the equity as another form of compensation for buying media through Videology.

While none of these practices are unusual in modern day agency/supplier/client relationships, the Videology bankruptcy filing reveals some of its magnitude. That said, it’s unclear what period or volume of business GroupM’s claim represents.

“Why is a seller of media paying so much money to a media buyer? How much have they been paying over the past 10 years?,” asked one observer after reviewing the filing.

In response to a MediaPost query, a GroupM spokesman provided the following statement:

“GroupM has had a widely acknowledged strategic partnership with Videology since 2012. We own a very small shareholding (3%, previously disclosed) and work with them in ten countries. In some markets outside the US, Videology purchases video inventory from GroupM and uses their advanced technology to create efficient, addressable audiences in brand-safe environments, which they sell to both GroupM clients and on the open market. The debt disclosed in the administration filing includes inventory purchased from GroupM and related transactions. Our relationship with Videology and its benefits are disclosed to our clients.”