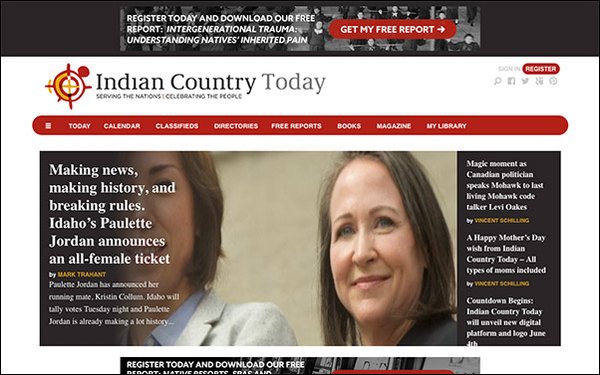 Indian Country Today, a publication that covers indigenous peoples, will relaunch this June “on the public media model,” after closing last September.

Indian Country Today Media Network announced Friday it will unveil its new logo and mobile platform on June 4 at the National Congress of American Indians Mid-Year Conference in Kansas City.

“Indian Country Today is ready for its next chapter, leading in the digital, mobile space,” editor Mark Trahant said in an Indian Country Today article. “Our primary focus will be the mobile phone, a platform where our readers are already migrating. We are eager to deliver the best journalism content and technology.”

Indian Country Today’s content will be free for readers and available for distribution by tribal newspapers, radio networks and digital publications. The web address www.IndianCountryToday.com will stay the same.

In February, Indian Country Todaylaunched an Indiegogo campaign to have readers support indigenous journalism. The campaign aims to raise $100,000 by Wednesday. As of Monday morning, it had raised over $37,700.

The “public media model”  includes a mix of financial support from readers, advertisers and grants from foundations, corporations and tribes.

“We will have some advertising but most of our resources will come from members and non-profits,” Trahant wrote in the campaign description.

Once owned by the Oneida Nation of New York, the publication changed hands last fall and is now owned by the National Congress of American Indians in Washington, D.C.

Last September, publisher Ray Halbritter described how Indian Country Today Media Network was facing the "same challenges that other media outlets have faced. It is no secret that with the rise of the Internet, traditional publishing outlets have faced unprecedented adversity.”

These “economic headwinds,” he continued, meant the publication was operating “at an enormous — and unsustainable — financial loss,” and had to go on hiatus.