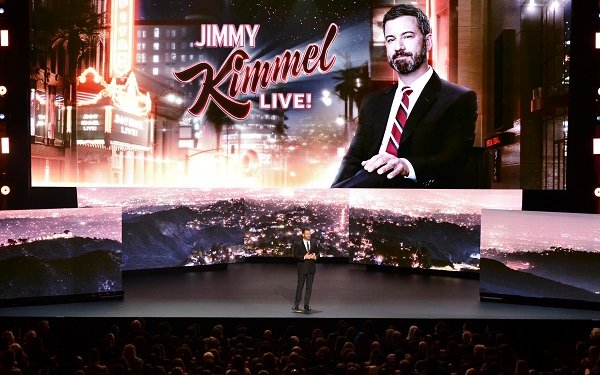 First and foremost, it is meant to be funny, which it is -- a comic monologue delivered every May at the ABC Upfront by Jimmy Kimmel.

This week, on Tuesday afternoon, the tradition continued, with Kimmel doing a monologue lasting 14 minutes at Lincoln Center’s David Geffen Hall. As is customary with these annual monologues, Kimmel skewered his company (Disney), his network (ABC), competing networks and the whole upfront sales season in general.

As usual, he got a lot of laughs with this year's monologue, although this annual tradition also gives cause to wonder if ABC is allowing its late-night star to undermine the network's sales efforts and programming plans a little too much.

In at least one instance in this week's monologue, Kimmel demolished one of the new shows ABC had not yet promoted or announced.

This made for a situation in which the two stars of this show -- an FBI-CIA action drama titled “Whiskey Cavalier” and co-starring Lauren Cohan (formerly of "The Walking Dead") and Scott Foley (formerly of ABC’s "Scandal") -- had to come onstage to promote their show a few minutes after the upfront audience had already heard Kimmel's assessment -- comedic although it was -- that the show was patent nonsense.

"We're also picking up a show called ‘Whiskey Cavalier'," Kimmel said, “that we'll learn about in a moment, which is exciting because it took awhile, but we finally came up with a title worse than 'Cougartown'!

"'‘Whiskey Cavalier'," he continued, "is described as a high-octane, hour-long, action dramedy that follows the adventures of tough but tender FBI super-agent Will Chase whose code name is Whiskey Cavalier. Should we cancel it now or would you rather wait?"

The "Whiskey Cavalier" bit came after Kimmel made fun of ABC’s failures from this past season, including "Quantico," "Marvel’s Inhumans" and "Deception" -- all cancelled. "We cancelled 'Deception,' a show about a magician who used magic tricks to help police solve crimes, which is a shame because it was such a good idea!” Kimmel said with obvious sarcasm.

"We also canceled 'Marvel’s Inhumans'," he said. “ABC did something remarkable last year I want to acknowledge. Somehow, we managed to have the only unsuccessful project with the word 'Marvel' in the title. It had never been done before!"

Noting the success of ABC’s "Roseanne" reboot, Kimmel said, "Everyone who says Hollywood is out of new ideas, we're not. It's just one of our new ideas was to Google 'what were our old ideas?'"

"Nobody at ABC expected 'Roseanne' to be a big hit," he said, "but to be honest, we never expect any of our shows to be a hit!"

"Our new strategy is: Resurrecting old crap. That said, I have three words for you -- who's the boss? No, I mean literally, who the hell is running this network?"

Kimmel eventually turned his attention to the mechanics of modern-day ad sales. "This year, more than ever, we have so many ways to reach your customers," he said, addressing the ad agency reps in the audience. "You're going to hear a lot about blockchain this week, and here is what's important about it: Nobody has any idea what it is! You don't know. We definitely don't know. But what we do know is: We're going to charge you up the ass for it!"

"There’s so much technology, so much terminology, there [are] so many 'shoppable moments,' you know?" Kimmel continued. "If anyone in this room used the words 'retargeting,' 'brand purpose' or 'vertical' anything today, please raise your hand, stand up and walk out into traffic."

"That said, we promise you this," he said. "At ABC, our programmatic, ad-tech, attribution models are retargeting SSPs using AI and omnichannel blockchain algorithms to offer a high [unintelligible] content amplification with optimized ER and ROI that will make you [expletive deleted] your P-A-N-T-S. I don't know what I just said, but it seems to have resonated."

"Let's be honest. This is all nonsense," Kimmel said. "Our ratings are down and our prices are going up. Too bad. Eat it."

“Let's not do this again next year,” he said in closing. “And I wish you all a whiskey cavalier.”