'Middle' Marches On: Farewell To One Of TV's Best Shows 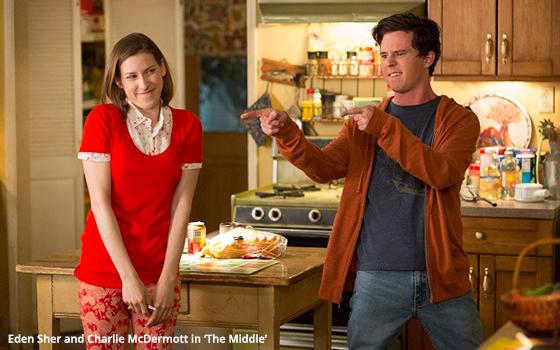 It may seem to followers of this TV Blog that the opinions expressed here about most TV shows are negative.

That is probably the case for a very good reason, based on a conclusion about the nature of TV and TV criticism that I came to long ago, which is: Most of what is produced for TV is so woebegone that writing TV criticism can be like shooting fish in a barrel.

However, not all of television falls into this category, which might be why a critic holds so much of the rest of TV to such high standards. Sometimes, a show will actually rise above the rest -- demonstrating that it is indeed possible to produce TV content that is decidedly not woebegone.

One such example is “The Middle,” the ABC comedy about middle-class, middle America that says good-bye this week (on Tuesday, May 22) with a one-hour finale on ABC.

This show, which lasted nine seasons, has long been one of the best-written, best-acted shows -- comedy or drama -- on television. It just might be the best family sitcom on ABC -- yes, even better than “Modern Family.”

“Modern Family” is one of the most inventive and creative shows ever seen in network prime time, but “The Middle” seems more representative of real families than “Modern Family” could ever be.

In this week’s series finale, which ABC provided for preview, the Heck family is preparing to say good-bye to eldest son Axl (Charlie McDermott), who is about to start his first real job in Denver, some 1,500 miles away from the family's home in Indiana (the “middle” of the country).

With Axl leaving to enter adulthood, the Heck family begins the slow process of evolution common to all families when children grow up and start lives of their own.

Axl's move to Denver is hardest on his mother, Frankie (Patricia Heaton), but even sister (and middle child) Sue (Eden Sher), little brother Brick (Atticus Shaffer) and laconic dad Mike (Neil Flynn) are having a difficult time with the prospect of their family experiencing a reduction from five to four.

The final episode is long on sentiment and comedy as the family embarks on a road trip to Denver to personally see Axl off on his new life. It is a great hour done to perfection.

There is even a coda tacked on at the end that gives a glimpse of how all of the various characters will fare later in life.

“The Middle” was a show in which all the moving parts came together to form a memorable and smoothly functioning whole. As usual, for those of us who have had the pleasure of watching this show for nine seasons, it is the cast that emerges as the most tangible and visible element in this show's success.

For many TV shows, particularly comedies, casting can make or break the whole thing -- which is why only a relative handful of casts really stand out as exceptional in the entire history of television.

The cast of “The Middle” was one of them -- starting with the three juveniles who grew up on the show in the roles of the Heck children. Of these, Eden Sher deserves special recognition. Her performance as Sue was consistently one of the finest seen on television anywhere during the show’s nine-season run.

If the show had a star, it was Patricia Heaton, who was the only marquee name in the cast when the show began. She is one of the best comedic actresses in all of television and one of the few to achieve near-total ubiquity.

It has become a common occurrence on almost any given evening to be grazing through the cable channels to come across Patricia Heaton twice -- and often at the same time -- in syndicated repeats of “The Middle” on one channel and “Everybody Loves Raymond” on another. Here's hoping she will be back in another show before long.

In the final episode of “The Middle,” Sue talks to her brothers about the joys of being the middle child, as the three argue over who will sit in the middle of the backseat on the family road trip.

“The middle is the safest place to be,” Sue tells them. “You've got love on both sides of you.”

That about sums it up.