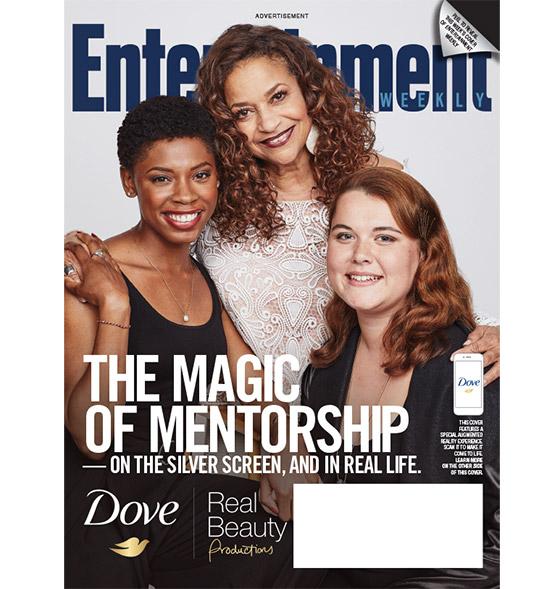 Entertainment Weekly is partnering with Dove on an ad campaign that will span three issues, available to subscribers only. Dove is sponsoring peel-off magazine covers enabled with an augmented reality video.

The first installment, which debuts in the May 25 issue, is Entertainment Weekly’s first peel-off cover unit — and the first time the brand has leveraged augmented reality within a print ad. It’s a first for Dove, too.

“We have done it before with edit; it performed well and readers loved it,” Ellie Duque, publisher and senior vice president, sales for Entertainment Weekly, told Publishers Daily.

Entertainment Weekly had an AR-enabled cover featuring Dwayne "The Rock" Johnson for its December, holiday-themed issue. “It was a good test, because now we understand readers love interacting with something new and different,” Duque said.

Dove's campaign spotlights the release of its latest film created by its production arm, Real Beauty Productions (RBP) film. Directed by Debbie Allen, the film features Chelsea Harris and Caralyn Singleterry discussing the impact of bullying on their self-esteem and how the Dove Self-Esteem Project can help build confidence.

All three women are featured on the peel-off cover of the Entertainment Weekly issue.

Amy Stepanian, director of marketing for Dove, told Publishers Daily the company wanted to celebrate the release of the film “the way movie studios do, by appearing on the cover of Entertainment Weekly.”

The film, called “An Hour With Her,” is a “timely” ad for EW, as it celebrates women’s empowerment and “what's on the mind of young women right now,” Duque added.

Entertainment Weekly subscribers can download the Life VR app and scan the magazine cover unit to unlock the four-minute film and watch it on their phones.

“Dove is bridging the gap between traditional channels and new technology to give readers and viewers the most immersive experience possible,” Stepanian said.

“Print has to work exceptionally hard” to grab the attention of its audiences, and the cover has to “be something special” to do that, Duque added.

An interview with Allen can be found on the back of the peel-off cover, as well as a spread featuring 13 of the 52-person all-female Real Beauty Productions cast and crew in the issue.

For "An Hour With Her," Dove worked with PR company Edelman and media agency Mindshare on paid media to promote the release of the film and the partnership with EW.

The other two issues with Dove-sponsored, AR-enabled peel-off covers will be released in July and September.

“Although the actual creative execution will vary, we will continue highlighting the Dove mission of championing real women and girls by helping them feel more positive about the way they look,” Stepanian said.