Grow Up--If You Can Figure Out What That Means Today 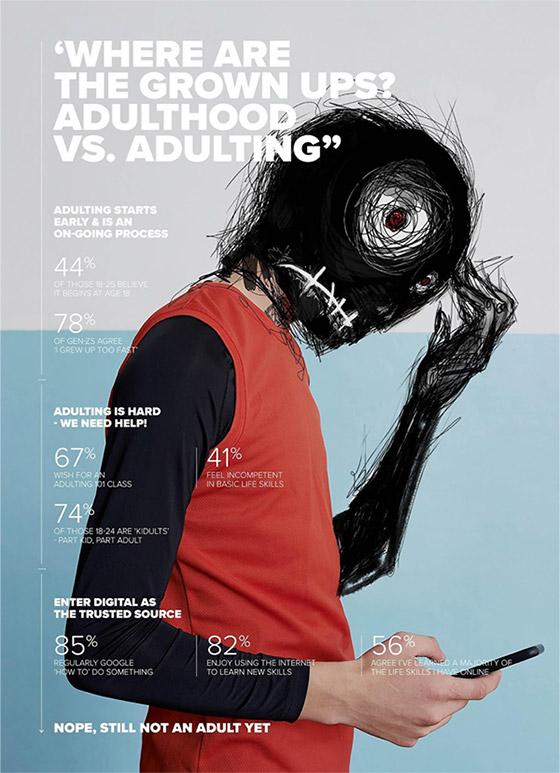 There has been a seismic shift within the advertising landscape. in which "adulthood" is no longer defined by life stages, milestones or a clear road map, according to exclusive research from Publicis Media and BuzzFeed.

"The process of becoming an adult is like running a race that doesn’t have a finish line to cross … and that’s a relatively new idea," says Alyson Stevens, senior vice president-director, analytics and insights, Publicis Media.

"It’s more likely for people to feel incomplete in their adultness — whether they are 25 or 35 or 45."

This means advertisers need to pivot away from demographics to understand current mindsets and behaviors. For one, today's kids are growing up faster than previous generations. Boomers on the other hand are often perceived as the generation trying to remain forever young. .

Three in four 18-24 year olds (74%) describe themselves as "kidults," defined by the research as the space between a real adult and child, but more notably, 64% of 25-34-year-olds and 58% of those over age 35 also describe themselves within this in-between state of identity.

"It's not age or gender driven at all," says Edwin Wong, vice president research and insights, BuzzFeed. "There is this permanent state of adolescence where how people define themselves is more about their identities."

Unlike previous generations, younger consumers aren't able to turn to their elders for guidance, with 70% saying their parents have a hard time giving them advice about the future because traditional systems have been so significantly disrupted.

"The rate of innovation and change continues to accelerate throughout tech and culture," says Stevens. "This means that even if you think you have everything figured out today, tomorrow is bound to be different and it will require new information, skills and perspective."

Their research reveals that traditional milestones have been reassessed.

Three in four Gen Zers (74%) don't see marriage as a permanent institution but instead believe it should "maybe last only a few years." Four in 10 don't think they will support themselves with a traditional 9-to-5 job and only half are well-prepared to live independently.

Advertisers, as a result, should help these kidults rather than simply sell them products. The vast majority of those under age 40 (85%) regularly Google how to do something, with 56% saying they have learned a majority of their life skills online. "I was surprised to see that people trust these sources on par or even more so than their parents or their friends," says Stevens.

Today's youth turn to online searches for everything from how to wash their hair to finding retirement plans, says Wong. Two in three (67%) wish for some type of "adulting 101" class and 41% feel incompetent about basic life skills.

"The rate of disruption and change has created an ‘expert crisis’ for consumers – creating other opportunities for brands to step in and build credibility and trust with emerging adults by offering authentic, empathetic and utilitarian advice," says Stevens.

"The paradigm shift from trusting “those who know ME best” to “those who know BEST” is a significant one," says Stevens. "It certainly highlights the massive opportunities out there for brands to lean in and provide guidance and resources when people are actively looking for answers…and even passively scrolling through content."

Advertisers would be well-advised to develop how-to videos around their core competence, such as laundry detergent or dryer machine brands, releasing how-to videos teaching the proper ways to wash clothes. Or wine makers teaching drinkers how to repurpose their bottles as garden decorations.

Less than half of adults are actively seeking content on the areas that are most critical to their future, despite high interest and a lack of existing knowledge. That means brands need to utilize both push and pull tactics to engage with their audiences. Wong cautions: "They aren't looking for marketers to directly tell them how to do things."

BuzzFeed's Tasty network, for example, garners millions of views through its accessibility and because it doesn't make viewers feel stupid, Wong says.

The research finds that each unique subject benefits from specific sources and tonality, "so it’s really important for brands to understand their audiences and use that understanding to create compelling content tailored to their needs," says Stevens.

More than half of Millennials and Gen Zers (54%) say social media has made their life easier. To the end, with 80% of visitors using mobile devices to specifically access BuzzFeed content, Wong points out that it is critical for brands to develop mobile-first content. Millennials and Gen Z want nicely edited, short videos. They want organic and easy-to-share content that serves a purpose in their lives whether it teaches them how to do something or makes them laugh.

"We've move from a point to process, adulthood to adultity, and this point of self-actualization to a process of self-optimization. The reality is the [Maslow hierarchy of needs] triangle has fundamentally flipped because of digital's ability to give us ample time, room, and opportunity to optimize against life's biggest challenges. We are trying to grow up!" Wong notes.

The research underscores that this in-between mind-set spans across all categories and brands. BuzzFeed — widely viewed as an early trend-spotter of “adulting,” isn't specifically developing a standalone vertical. The platform believes this thread is too universal to isolate into one category.

Wong says the word sees consistent year-round traffic accounting for more than 2.4 million media impressions that range from how hard it is to be an adult to disclosing how a person just ate a bag of Doritos for lunch.

Adds Stevens, "Right now, there is still some extra baggage that Millennials and Gen Xers are carrying around — specifically this flawed notion that being an adult requires you to have everything 100% together. That’s just not realistic, and I think the more people talk about it honestly, the more comfortable future generations will become with walking their own path and not having everything figured out."

The research interviewed more than 4,000 consumers ages 18-45 in the U.S., UK, Australia and Brazil. In addition, the U.S. segment of the report also queried 16 year olds.

advertising, agency, research
3 comments about "Grow Up--If You Can Figure Out What That Means Today".
Check to receive email when comments are posted.
Read more comments >
Next story loading