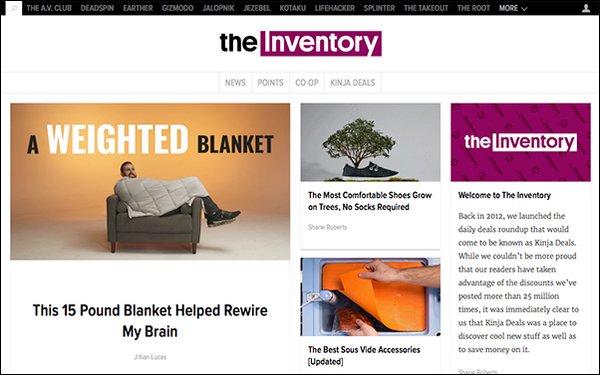 Gizmodo Media Group’s commerce team has launched The Inventory, a site dedicated to curating new consumer products and home to all of the publisher’s commerce content.

The Inventory aims to find the best products on the internet and the best deals. It launched today with around 500 articles, recommending everything from a weighted blanket to the best razor.

In 2013, Gizmodo Media's commerce team began testing and curating product recommendations, after the successful launch of Kinja Deals the prior year. Kinja Deals publishes a daily roundup of deals.

Since 2012, readers have purchased more than 25 million products through Kinja Deals. The roundups delivered over 65 million clicks to retailers per year on average.

That’s a large chunk of revenue for Gizmodo Media's affiliate business; when readers click-to-purchase on a hyperlink to a Kinja Deal-recommended product, Gizmodo Media gets a small commission on the sale.

Kinja Deals will now live as a vertical on The Inventory. There are plans to expand the vertical’s reader-voted product series, Co-Op, too.

“When our team makes a recommendation, readers have demonstrated an increased propensity purchase. With the launch of The Inventory, we will be able to further leverage that authority as we expand into new categories and formats of commerce content to serve our readership in more ways,” stated Ryan Brown, senior vice president, business development.

The Inventory will focus on consumer products in categories like technology, home goods, lifestyle upgrades and outdoor-gear. Content will take the form of reviews, buying guides, roundups, gift guides and videos, as well as new tentpole reader events.

Shane Roberts, executive editor of The Inventory, added that what sets the site apart from other commerce recommendation sites is “our independence and dedication to reader service.”

“You won’t find roundups that amount to syndicated reviews from retail sites or articles driven by commission rates. You won’t find borrowed authority. We put every product we write about through the paces, and we only bring our readers the ones we end up loving,” Roberts stated.

Commerce content at Gizmodo Media is created independently of the editorial and advertising divisions at the company.