It's Settled: Here's The Best Case For Blockchain In Digital Media Buying 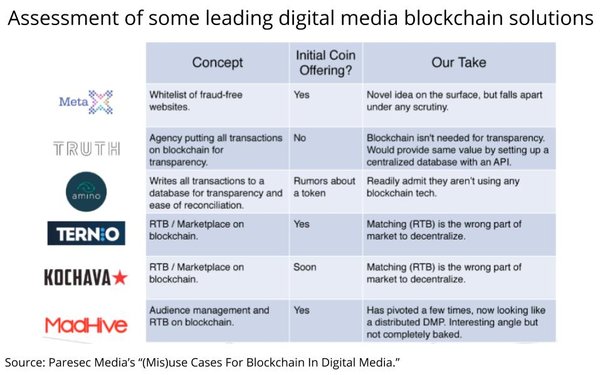 I was already thinking about the role blockchain may or may not play in digital media buying, especially the programmatic kind, before Parsec’s Marc Guldimann circulated a well-organized assessment of some leading digital media-buying blockchain solutions Sunday.

But the combination of his rationale and last week’s MediaPost Blockchain Marketing Forum convinces me that blockchain may not be the panacea many are championing.

For my part, I first started thinking about blockchain about three years ago. when some of my Wall Street trader friends began gushing about how it could solve trust issues for trading not just securities, but anything -- even tangible goods and services in the real world.

At first, I was both enamored with and a bit confused by how blockchain could actually fulfill that promise. Three years later, though, I think its best use case is exactly what Guldimann outlines in his well-reasoned white paper: “settlement.”

“In typical markets, middlemen mitigate the lack of trust between buyers and sellers. Properly implemented blockchains replace middlemen with software that executes immediate swaps of currency for value,” Guldimann writes in “(Mis)use Cases For Blockchain In Digital Media.”

In other words, the proper use case for blockchain isn’t necessarily in cleaning up all of the trust issues surrounding digital media-buying transactions, as many of its champions assert. (That is, assessing whether it was the right audience inventory in the first place, whether it is fraudulent, “viewable,” etc.)

The proper use is in clearing and settling the trade when those terms are fulfilled, based on the parameters of the trade.

That’s not what some of the new blockchain middleman providers are claiming, suggesting they can be a complete end-to-end solution.

If you ask me, there’s more than a bit of smoke and mirrors in those assertions, which makes me more suspect of their intentions.

That's especially true when it involves the raising of millions (or more) in capital, via an initial currency offering (ICO) to fund the solutions, or incentivize individuals in the chain to ensure a secure end-to-end processing.

One of the biggest reasons I feel this way is just a human one -- a good old-fashioned journalist’s Spidey-sense. When I’ve asked some of these providers to explain why they need to create a new currency and raise capital associated with it in order to securitize media-buying transactions, they cannot give me a straight answer.

I’ve heard claims like this covering the business over the past 30+ years. From my point of view, blockchain is just part of a technical progressions from EDI (electronic data interchange) to “eBiz” (paperless transactional trading) to “programmatic” (the use of algorithms and machine learning to augment human processing of media-buying inventory), etc.

Maybe in the not-so-distant future, a sophisticated AI program will replace the need for humans to mediate some of the trust points from the beginning to the end of a digital media buy. But like Guldimann, I don’t think blockchain is the solution in itself. Instead, it can be a more efficient and secure way of settling the trades.

What do you think?