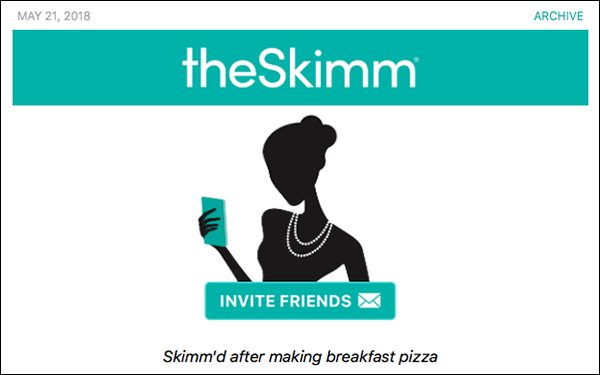 theSkimm has raised $12 million in a Series C funding round from a majority of female investors, including TV producer Shonda Rhimes and supermodel and entrepreneur Tyra Banks.

The group of investors to theSkimm, which is known for publishing a free morning newsletter aimed at millennial women, also includes Willow Bay, Dean of the USC Annenberg School for Communication; Jesse Draper, founding partner of Halogen Ventures; Linnea Roberts, founder and CEO of GingerBread Capital; and Hope Taitz, CEO of ELY Capital.

“As a female-led and founded company, we are excited to have the opportunity to bring such an impressive and dynamic group of female investors into theSkimm fold,” stated Carly Zakin and Danielle Weisberg, cofounders and co-CEOs of theSkimm.

“With a majority of our audience being female, it’s vital to the success of our business to involve women at every single level, and that includes our investors,” they added.

The Goldman Sachs Group and Michael Karsch of Juice Press also participated in the funding round.

theSkimm says this latest round of funding “will continue to evolve the brand and grow its multiplatform, routine-based product offerings -- both premium and free.”

Those free product offerings include theSkimm’s daily newsletter, the Daily Skimm, the “Skimm’d from The Couch” podcast series and video series “Skimm’d With...” and “Get Off The Couch.”

The company launched a paid product in 2016 called 'Skimm Ahead,' where consumers can pay $2.99 a month to stay up to date on important moments — such as when to send flowers for Mother's Day and when to book flights for Memorial Day weekend. The items can also get automatically added to users’ digital calendars.

The Daily Skimm is sent to over 7 million millennial women each morning. The company also has a network of 30,000 brand ambassadors.