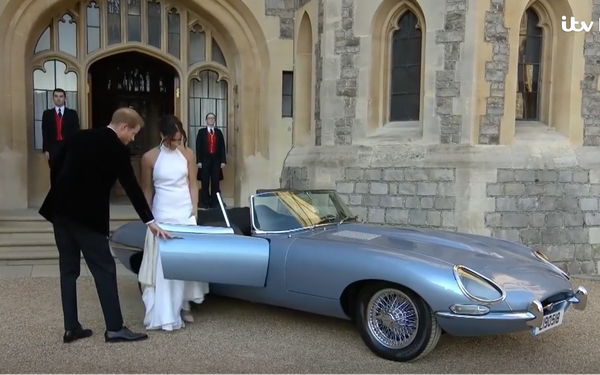 It wasn’t just the fashion houses that got to strut their stuff during the royal wedding on Saturday.

The first head-turner was a vintage Rolls-Royce Phantom IV that delivered bride Meghan Markle and her mother Doria Ragland to Windsor Castle. Kensington Palace said the automobile was built and delivered in 1950. It was the first Rolls-Royce of Queen Elizabeth II and her husband Prince Philip.

It was surrounded by a fleet of modern Land Rovers and Range Rovers driven by the British secret service, royal guards and police, as was every other royal vehicle.

Before they got to the chapel, Ragland was moved into a Bentley Mulsanne and replaced in Markle’s car with Brian and John Mulroney, the seven-year-old twin sons of Meghan’s best friend, Jessica Mulroney, who assisted with the guiding Markle's 16-foot train down the aisle.

Prince Harry and his best man and brother, Prince William, arrived in a subdued but stately Mercedes European V-Class.

Queen Elizabeth II and Prince Philip arrived in a custom Bentley, one of the state cars. For most public engagements, and for some ceremonial occasions, the Queen is chauffeured in official state cars that have been built to unique, exclusive specifications. This particular Bentley was presented to her by the British automotive industry as a gift to celebrate her Golden Jubilee in 2002.

The Queen is quite a fan of automobiles. Her favorite ride is reportedly the Land Rover Defender, and the royal family has an extensive collection of rare and expensive vehicles.

The collection at the royal family’s country estate near Sandringham, England, is worth about $13.5 million, according to a 2016 report from U.K. car-shopping website Car Keys. The most dear is a Daimler Phaeton from 1900, the very first royal car.

Unlike other bespoke Bentleys, which are based on production vehicles, the Queen’s cars are built specifically to her own discerning specifications, according to Car Keys. Each car is nearly three feet longer than a standard Bentley Mulsanne, itself one of the longest production cars in the world.

Prince Charles and his wife Camilla arrived in a vintage Rolls Royce Phantom VI, similar to the one that in 2010 was attacked in London after driving into a riot with protesters hurling bottles. Kate Middleton, the Dutchess of Cambridge, arrived with Markle’s six bridesmaids and four pageboys in three vintage Daimler DS 420s.

After their reception, the newly titled Duke and Duchess of Sussex departed Windsor Castle in a silver-blue Jaguar E-Type Concept Zero (the Jaguar XK-E for the North American market), an electric version of the 1968 British classic. (Apparently, the apple doesn’t fall far from the tree: Prince Harry’s father, Prince Charles, is an environmentalist who founded a large-scale organic farming operation and food company 25 years ago, called Duchy Originals.)

Appropriately during the full-day coverage of the events on BBC America, Land Rover repeatedly ran “Respect,” a fairly new spot for its Velar featuring “wolves” (Swiss white shepherds) that are intimidated by the vehicle.

Now that the festivities are over, Markle has to get used to being a royal. First up, CBS News reports, she is due to receive special driver’s training in how to evade attack or kidnapping attempts. She'll learn escape and evasion techniques, including J-turns and Y-turns. However, Markle may never need to execute any evasive maneuvers herself, since she'll be assigned a personal driver as part of her royal protection detail.