Spotlight On T-Mobile And Sprint: Consumers Are Concerned About Less Competition

With only four major wireless carriers in the U.S. market today, the recent announcement of plans for T-Mobile and Sprint to merge has raised some apprehension. In a survey of U.S. adults earlier this month, 58% were aware of the pending merger before being surveyed. Overall, 65% of respondents expressed concerns that less competition in the wireless space could mean higher prices for consumers, while customers of all four report high satisfaction levels.

Concurrent with the merger announcement have been reports about the potential to bring 5G technology (5th generation wireless) to the U.S more quickly than originally anticipated. Roughly half (47%) of respondents had heard of 5G at the time of being interviewed. Males were much more likely than females to be aware of 5G (57% to 38%). And 56% of those between the ages of 25 and 34 have heard of 5G, making them the age group most aware.

Despite the race for companies to develop and deliver 5G to their customers, survey findings show that only 27% are likely to switch carries in order to gain access to 5G speeds upon its release. Almost half of respondents (49%) report that they are not very or at all likely to make a switch in carriers. The younger demographic is more inclined to do so, with 46% of both the 18-24 and 25-34 cohorts reporting they would be extremely or very likely to switch carriers for 5G. Looking across wireless companies, current AT&T customers are most likely to switch for 5G access when the time comes, with 40% reporting as such. 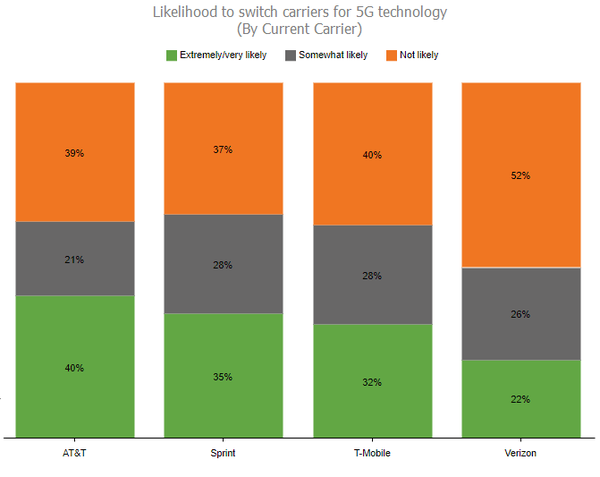 At the time that the survey was conducted, each of the four major players in the marketplace had the following customer share among respondents: AT&T (25%), Verizon (23%), T-Mobile (11%) and Sprint (8%). Regardless of carrier, customers report being very satisfied with their current cell phone company, with each yielding a satisfaction rating of 70% or higher. T-Mobile had the highest level of satisfaction among its customers, with 80% stating they are very or extremely satisfied. AT&T is just on the heels of T-Mobile, with 79% ,and closely followed by Verizon with 77%.