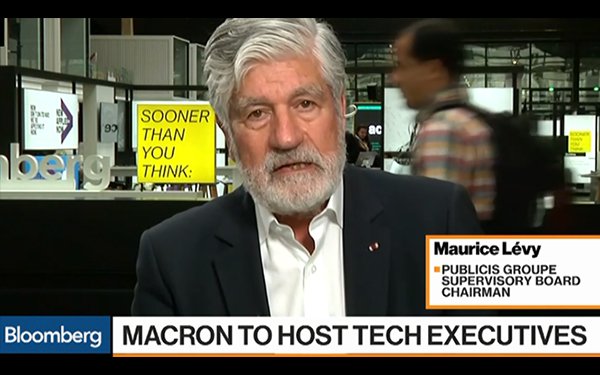 In fact, now he now looks more like a creative director — full beard and no tie!

Just in time for the company’s big Viva Tech conference in Paris this week, Levy did an interview with Bloomberg showing off the new look. And he carries it off well, don’t you think? Very distinguished looking in that wise professorial kind of way!

Anyway, he may have left the CEO perch, but he’s still very involved with the company as chairman of its supervisory board and a driving force behind the Viva Technology conference, which has morphed into kind of a big deal in just a few years.

The conference is drawing a Who’s Who from the tech world, including Facebook’s Mark Zuckerberg; Levy will interview him on stage Thursday at the conference. Levy told Bloomberg he’ll quiz Zuck on a number of issues, including the whole Cambridge Analytica scandal.

Should be an interesting conversation.

Levy told Bloomberg he thinks FB was “a bit of a victim rather than accomplice” in that whole mess. While there may be some truth to that, here’s hoping Levy won’t let Zuck completely off the hook.

FB seems to track just about every click on the web its members make, so maybe it should have been a little more on top of its business relationship with Cambridge Analytica, don’t you think?

IBM’s Ginni Rometty and SAP’s Bill McDermott will also be participating in the conference, along with French Prime Minister Emmanuel Macron, who will be talking up French technology entrepreneurship and encouraging investors to back startups in the country.