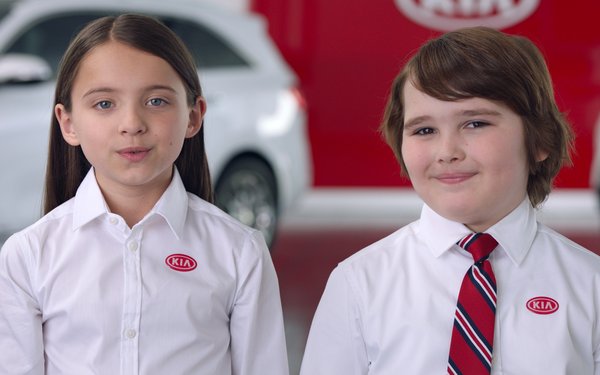 Kia Motors America believes it doesn’t need the traditional attention-seeking gimmicks in order to have a successful summer sales event.

A campaign supporting that notion is comprised of seven spots including one geared toward the Hispanic market, and a Jimmy Kimmel segment. The campaign includes Donut,Sister,  Soft Sell, Space Helmet, Hamburger and Balloon.

The campaign states the obvious reason consumers should consider Kia, which is because Kia is “America’s Best Value.”

The message is such a “no brainer” that traditional sales techniques — including free donuts, showrooms stuffed floor-to-ceiling with balloons, and in-your-face sales people — are replaced with two children who state the case clearly and simply.

The sister takes a more brass-tacks, dry-humor approach, providing the information customers need to make an informed decision. Her brother, on the other hand, comes from the more traditional “showman” school of sales, which adds comic relief and creates a great dynamic that balances the two characters.

The two children featured in the campaign made an appearance on ABC’s “Jimmy Kimmel Live!” on May 22.

The campaign, created by David&Goliath, was shot on a stark white set representing a Kia dealership. The young sister and brother eschew the gimmicks and stick to the facts highlighting the various reasons Kia is the better choice, including the brand’s 10-year/100,000-mile warranty.

Other elements of the campaign include digital, social, point-of-sale, in-cinema and outdoor, highlighting Kia’s most popular vehicles including Forte, Optima, Sportage, Soul and Sorento.

“This campaign is about challenging the conventions of retail car advertising and portraying value through the eyes of two very wise kids as spokespeople,” said David Angelo, founder & chairman of D&G, in a release. “The kids are more pragmatic, and represent the youthful, challenger spirit of Kia and new kind of consumer. One that is not easily swayed by gimmicks and tricks of the trade. Because when you have a great product, you don’t need all the hoopla to sell it. Value is all you need.”