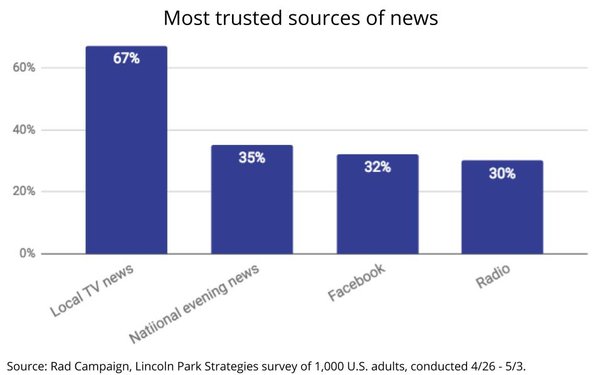 At a time when certain local broadcasters are becoming more aggressive in their political advocacy (think Sinclair Broadcasting), more Americans say they trust their local TV news outlets by a margin of two-to-one over national sources of news.

The finding, which comes from the just-released 2018 edition of a bi-annual survey by Washington, D.C-based agency Rad Campaign and analytics firm Lincoln Park Strategies, indicates that two-thirds of Americans trust local TV news vs. only 35% who say they trust the next most trusted news source: national evening news.

The survey did not ask about print media, but found Facebook is now deemed almost as trustworthy a news source as national network TV news outlets, with 32% of the respondents trusting it.

These findings may seem surprising given the revelations about the role social media in general and Facebook in particular have played in disseminating actual “fake news” in the past couple of years. It’s also scary considering that social media is closing in on television as the primary source for accessing news.

According to an August 2017 survey by the Pew Research Center, the gap between TV and social media as a news source narrowed to just seven percentage points from a 19 point spread the previous year, with 50% of Americans citing TV vs. 43% citing social media as their source for news.

Scarier still is the fact that the new survey finds that 50% of Millennials get their news from social media.

Remarkably, the percentage of American adults who say they use Facebook regularly has actually gone up -- 73% in 2018 vs. 70% in 2016 and 68% in 2014 -- despite its role in disseminating fake news, as well as revelations about Cambridge Analytica’s illicit use of the personal data of millions of Facebook users to help target them with it.

These trend lines are troubling for sure, but my biggest concern is the role biased political news reporting could play in local television given the degree of trust Americans place in it, and the less than transparent way Sinclair is beginning to editorialize.

And for the record, if anyone questions the bias in this column, it is 100% my own point-of-view and does not necessarily represent the views of MediaPost or our readers. What’s your view? 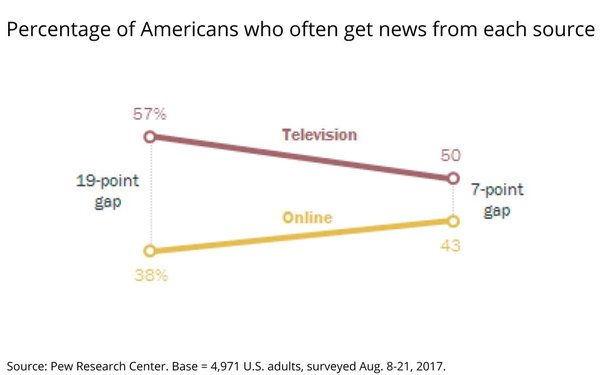