'The Americans' Ends Run On FX, While Cold War Continues 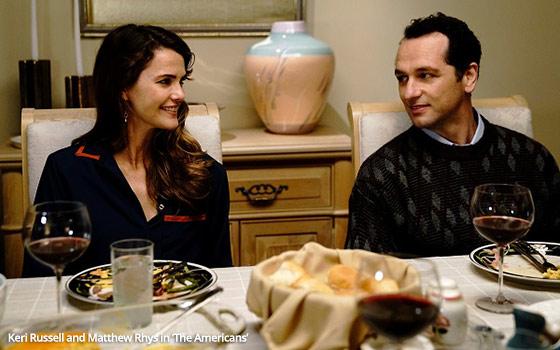 America’s fixation with Russia never seems to ebb, does it?

Russia is in the news every day in this era of ongoing investigations into Russian collusion in our presidential election processes.

Whether the Russians did or didn't, or to what extent they did (or didn't), we always seem to think (or assume) that whatever wrongdoing there is to do in the world, in opposition to the U.S. and our way of life, the Russians are probably the ones doing it.

The FX series “The Americans” reminds us that our national Russia fixation (for decades a Soviet Union fixation) has gone through many eras in many forms.

"The Americans" focuses on one of those eras -- the 1980s and the Cold War spycraft that characterized much of that decade in and around Washington.

This series ends its sixth and final season Wednesday night on FX as the then-new Soviet premiere, Mikhail Gorbachev, is moving toward easing tensions with the U.S. and the west, throwing the world of the show’s embedded Washington spies into turmoil.

As the finale gets underway, the spy couple Philip and Elizabeth Jennings (their adopted American names) are on the run from, among others, their neighbor, friend and FBI agent, Stan Beeman.

The final episode, which FX provided for preview, runs for more than an hour (90 minutes with commercials). Fans might debate whether this finale, and the fates and fortunes it sets up for all of the show’s principal characters, truly satisfies.

The best parts of “The Americans” were the performances by Matthew Rhys and Keri Russell as the Soviet-spy couple and Noah Emmerich as their FBI neighbor.

For me, other aspects of the show were puzzling, if not exasperating. Chief among these was the decision made at the beginning of production on this show to film it mainly in and around New York, and expect New York's neighborhoods to stand in seamlessly for Washington, D.C. and its environs.

But for those of us who live in New York, and presumably those who live in the Washington area too, accepting streets and neighborhoods we know well as Washington locales is impossible. They just do not look the same.

It reminds me of the vogue 20 or 30 years ago for filming movies and TV shows in Canadian cities such as Vancouver and expecting viewers to believe they were taking place in New York. Why “The Americans” couldn't set up shop in Washington at the outset was something I never understood.

Speaking of locations that make no sense, at one point in the “Americans” finale, an Amtrak train is filmed from above to indicate a leg of the couple’s escape plan. Then, a second later, they are shown to be riding in a train operated by Metro-North, the train line serving New York's northern suburbs. The train even says so -- “Metro-North” -- right on the side of it.

On this show, the train takes the couple all the way to the Canadian border, which is some neat trick for a Metro-North train. Oh well, maybe this contradiction in rail travel is fixed somehow in the final cut airing Wednesday night.

Despite these production flaws, “The Americans” was always compelling to watch, and the finale is no different.

The playing of a U2 song at one point in the final episode is a nice touch too -- evoking not only the ’80s but the Cold War itself in the name of this Irish band that took their name from an enduring symbol of the long standoff between the U.S. and Soviet Union.

That standoff is alive and well today, even if the world of “The Americans” is long gone.

The series finale of “The Americans” airs Wednesday night (May 30) at 10 Eastern on FX.

news, politics, tv
1 comment about "'The Americans' Ends Run On FX, While Cold War Continues".
Check to receive email when comments are posted.
Next story loading