Most Of TV Chooses To Ignore Memorial Day 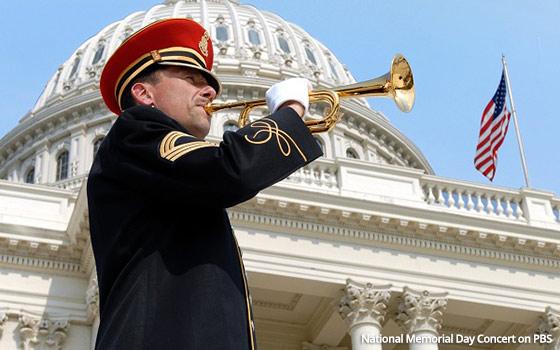 ABC will mark Memorial Day -- the national holiday established to honor those who have died serving their country -- with a new bachelorette being wooed by a man in a giant bird suit.

The man in the yellow bird costume is one of 28 suitors who will try to win the love and hand in marriage of this season’s bachelorette, one Becca Kufrin. This new “Bachelorette” -- the show's 14th edition -- gets underway with a two-hour premiere Monday night (Memorial Day).

The TV Blog had a great photo of Becca and her bird-suited beau playing patty-cake on the show that we could have used at the top of this blog.

But in the interest of good taste, we went with the photo you see here of a bugler playing taps near the U.S. Capitol as part of PBS’s “National Memorial Day Concert” airing Sunday night (which doesn’t happen to be Memorial Day, but it’s close enough).

On TV, where Memorial Day is concerned, good taste is in short supply. As a matter of fact, this annual holiday concert special on PBS is one of the few programs related to Memorial Day or military service that you will see on TV this holiday weekend.

In case you are wondering, none of the 28 suitors on “The Bachelorette” are servicemen, although one is identified as a “colognoisseur” (evidently a connoisseur of male fragrances) and another man’s occupation is described as “social media participant.” What is that? A euphemism for “out of work”?

Once upon a time, A&E made a point of scheduling Memorial Day-related programming on the Monday holiday. Among other projects, I remember two very good made-for-TV movies.

One was about General Eisenhower in World War II, with the role of Ike played by Tom Selleck, who was great in it. Another time it was a TV movie about John McCain and his experiences as a prisoner of war in North Vietnam.

Not anymore, though. This coming Monday night, A&E will have a prime-time interview special with the parents of Casey Anthony (who was famously acquitted in the murder of her daughter in 2011 -- two year-old Caylee).

Lately, it seems that the only thing some basic-cable channels know how to do is produce new documentaries about sensational crime stories from the past decade or two. Can't they give it a rest for one night?

Elsewhere on the tube Monday night, CBS will feature a lineup of its regular shows -- reruns of “Mom,” “Man With a Plan,” “NCIS: New Orleans” and “Elementary.”

A Stanley Cup Final game is scheduled for NBC and Fox will have an episode of “Lucifer,” the devil drama it recently cancelled.

At 10 p.m. Eastern on Monday night, Discovery is bringing back “American Chopper,” which was once one of the best family-reality shows on TV. Welcome back, Teutuls.

But before that happens, Discovery will run a daylong marathon of its atrocious reality show, “Street Outlaws,” which celebrates illegal drag-racing. Happy Memorial Day to you too, Discovery.

The Discovery-owned American Heroes Channel will run episodes of “World War II In Color” in prime time on Memorial Day. That ties in vaguely with the holiday, but much of this documentary series -- which has been run on AHC dozens of times already -- is about the global experience in the war, not necessarily the American experience, which is what Memorial Day is all about.

All weekend, Turner Classic Movies will serve up a steady diet of old war movies, as they do every year.

All things considered, however, the indications are that the vast majority of TV networks gave no thought whatsoever to putting on programming even remotely related to this once-sacred holiday, particularly in an era -- today -- when many Americans have formed the habit of thanking servicemen and servicewomen for their service wherever they encounter them.

It is not the worst thing in the world for the nation's TV networks to ignore Memorial Day. But on the other hand, it wouldn't have hurt any of them either to consider putting something on that commemorates this day, other than commercials for mattress sales.