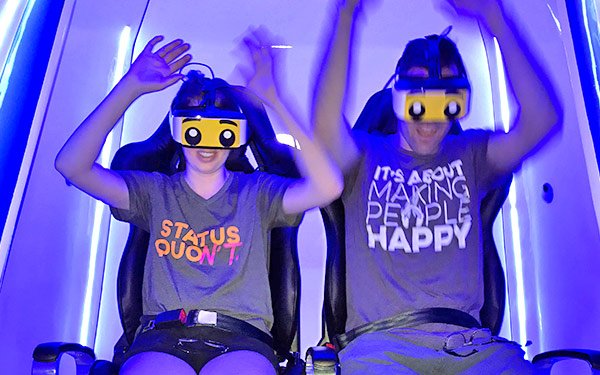 There can be somewhat of a generation gap relating to the mass adoption of virtual reality, but one global brand is doing its part to tackle that issue head on.

Legoland Discovery Center in Boston just added ‘The Great Race VR Experience,’ the first and so far the only one of the 11 Discovery Centers in North America to launch a virtual reality indoor program.

Earlier this year, ‘The Great Lego Race Virtual Reality Coaster’ opened at the Legoland Florida resort. In that experience, riders wear a VR headset on their rollercoaster ride and get the perspective of a Lego mini-figure racer flying through a Lego brick-made environment.

The new indoor VR experience is a modified version of the Florida rollercoaster ride, except while sitting in what Legoland Discovery Center calls a VR Cinema Pod.

To check it out over the weekend, I trekked over to Legoland at Assembly Row, a massive aggregation of outdoor shopping, dining and entertainment establishments, technically in Somerville, a couple minutes’ drive from the Boston line.

Legoland Discovery Center is a huge children’s’ playland filled with all things Lego, ranging from Lego-built Boston buildings, sports arenas and even Logan Airport, to play areas where children can create things from the Lego pieces that are everywhere.

The twist for introducing a mix of generations to virtual reality is built into the Discovery Center rules: to enter, adults must be accompanied by a child, except for periodic ‘adult nights.’

The VR pods have two seats. As a result, a child in the VR pod is likely to be accompanied by their adult, so both experience virtual reality together.

Unlike some other promotions showcasing virtual reality, the VR headsets here are simple and quick and easy to put on (even adults we watched could do it hassle-free).

The Great Lego Race was developed by Figment Productions and the VR Cinema Pods were created by Immotion, a U.K immersive entertainment business. The VR headsets are Deepoon E3, which have three degrees of tracking.

After buckling in, the VR experience involves a quick immersion into a Lego-filled high-speed chase, going up, down and over, which the moving pod accurately simulates over the several-minutes-long ride.

The marketing intent of the VR experience is to test to see how it works and if it’s a viable addition to the attraction. The plan is to run it at the Boston location until the end of the year and, if all goes well, to make it a permanent part of the Discovery Center. A later decision would be made regarding the other Legoland Discovery Centers, all owned by Merlin Entertainments.

Meanwhile, more and more adults and their children will be learning and experiencing what virtual reality is all about. Two at a time.