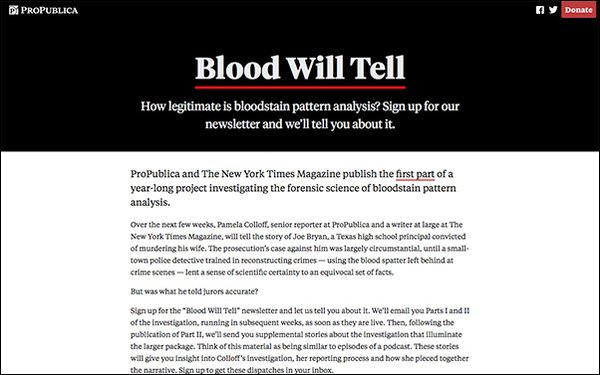 Newsletter and podcasts have become important ways for publications to deepen their relationships with readers, while creating new revenue streams.

Over the next year, The New York Times and ProPublica will deliver a new newsletter to subscribers titled “Blood Will Tell.”

In the series, Pamela Colloff, a senior reporter at ProPublica and a writer at large at The New York Times Magazine, investigates the case of Joe Bryan. Bryan is a former Texas high-school principal convicted of murdering his wife.

The series goes beyond simply rehashing the case. Rather, it dives into how Bryan was convicted, ultimately, because of blood spatter left behind at the crime scene. It then asks how reliable bloodstain pattern analysis is.

Following parts one and two, additional stories will give readers insight into how Colloff reported the story and put together the narrative.

ProPublica has become an incredibly important outlet, given its financial support for investigative pieces. In fact, nonprofits boosting journalism once done by traditional news outlets have become more common.

Separately, The NYT’s has regularly proven to be a contender when it comes to innovative digital publishing, as it finds new ways to revive standard formats, while also pushing into new territory.

Colloff’s story was the first to be told through the ProPublica and NYT’s partnership. The result reveals how a reporter was able to use the strengths of each outlet to tell a story fully to an interested audience.

Given the strengths of each outlet, Colloff can report in a way that would be impossible, were she limited to one format. How many newsrooms have the time, capacity and funding to support a journalist as she conducts an investigation into a true crime story? And the stakes are high: Investigating the tools used by police can determine whether a person goes free or is jailed.

As budgets and staff are continuously stretched in the coming years, the importance of collaborations like “Blood Will Tell” will rise in importance. As publications fixate on bottom advertising line, nonprofit outlets can support enterprise efforts. Plus, the knowledge that readers are still hungry for great investigative pieces underscores the importance of investigative journalism.