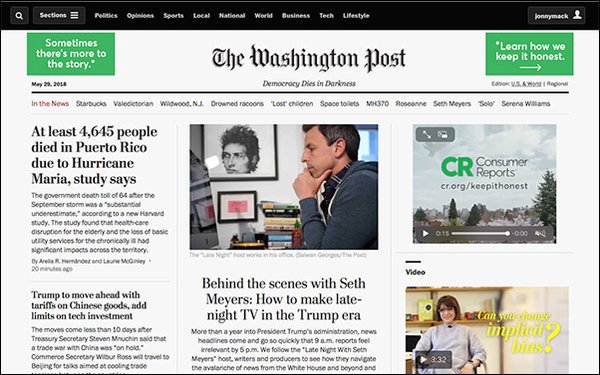 When the EU's General Data Protection Regulation (GDPR) finally went into effect May 25, newspapers in the U.S. responded in many ways, with some blocking European readers from their sites.

Tech companies Facebook and Twitter responded to the regulation by deleting the accounts of users with EU IP addresses who wouldn’t agree to their privacy policies.

The Washington Post, rather than block readers, introduced a “Premium E.U. Subscription.” The new level of subscription costs $9 every four weeks or $90 a year, as opposed to the basic subscription rate of $6 ever four week or $60 a year.

By paying for the premium service, subscribers are guaranteed their data will not be used by third-party ad trackers. Also, they will not see on-site advertising, thereby complying with the new regulation.

Those with a basic subscriptions consent to the use of cookies and tracking by both WaPo and third parties.

Other outlets, like those owned by Tronc, including the Los Angeles Times and the Chicago Tribune, have outright blocked readers with an EU IP address, while The USA Today Network limited access to its site, providing European readers with its “European Union Experience.”