In World Without Limits, Boundaries Are Impossible To Define 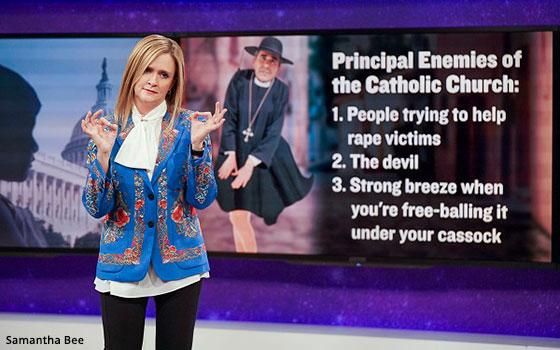 This is by no means a defense of Samantha Bee and her use of the c-word in an insult aimed at Ivanka Trump.

But how was Samantha Bee supposed to know that that particular word or point of view was off limits?

Except for this one time -- when she used this bleeped four-letter word to refer to the president’s daughter last week on her TBS show “Full Frontal” -- Bee is accustomed to receiving wild applause for her utterances.

Now, however, Bee is suddenly in hot water for this c-word controversy, although her entire act has been predicated for years on making statements similar to this one. As the robot said on “Lost in Space”: It does not compute.

For all intents and purposes, we now live in an anything-goes world that knows no limits when it comes to the things we can say in public.

People, both famous and not famous, issue outrageous statements every day -- on Twitter, on late-night shows, on prime-time talk shows, in blogs, in interviews, in the comment sections of blogs and news stories.

Most of the utterances come and go without undue comment or cries for dismissal and the like. Perhaps that is because there are so many of them created and disseminated every minute of every day. Who can keep up with it all?

Due to their higher profiles, TV personalities such as Bee and Roseanne Barr can be kept up with, however. When they make statements, people make note of them.

And in the case of Bee or Bill Maher, for example, their statements stay alive on YouTube and other places for years, if not forever. Which means that once they have said them, they cannot be unsaid.

If the world at large is now a place where self-expression knows no boundaries, then the media business today is the world in microcosm.

Although there might be standards manuals gathering dust in desk drawers somewhere, TV networks today do not seem to maintain rulebooks, style manuals or any other guidelines that would help personalities such as Bee and, just days before her, Roseanne Barr, to rein themselves in before they post a tweet or approve the monologue someone wrote for them.

On the contrary, TV personalities such as Bee are encouraged to push the envelope, and 99.9% of the time they are roundly praised for it.

For example, on Friday morning when I went in search of a Samantha Bee photo on the Turner Networks press Web site, I came across the photo above made from an episode of “Full Frontal” in which Bee is evidently doing a bit slamming Catholics.

In case it is too small to read, the text on the screen behind her says this: “Principal Enemies of the Catholic Church: 1. People trying to help rape victims, 2. The devil, 3. Strong breeze when you’re free-balling it under your cassock.” A priest with a windblown cassock is pictured at left.

This is not a commentary on the particular qualities of this comedy bit -- good, bad or indifferent. But it says something about a media world without boundaries when a network publicity department actually posts a photo -- for publicity purposes -- of one of its personalities going after a religious group.

It is saying: It's OK to say whatever you want. So when Samantha Bee receives a script for a monologue in which she will later call the president's daughter a c--- on TV, then how is Bee supposed to know she shouldn't say it?

The only governance over this kind of statement and, earlier last week, Roseanne Barr’s “planet of the apes” tweet, is the reaction that happens afterward -- which certainly is not helpful to TV personalities who have never heard of the concept of thinking before they tweet or considering carefully what they are about to say before they go out onstage.

Another result of these dust-ups is the sudden withdrawal of advertisers. In Bee’s case, two sponsors -- Autotrader and State Farm -- reportedly sent word to TBS following the c-word controversy that they are suspending their advertising in “Full Frontal.”

This reaction is sanctimonious. Advertisers seem only to become upset about the contents of TV shows after some public uproar.

In other words, these advertisers would appear to have no clue about the TV shows in which their commercials run until some groundswell of complaint erupts on Twitter.

Here is a message to the nation's sanctimonious advertisers: Your messages run routinely within all sorts of tasteless, violent and profane content on TV. Given everything else that is permissible in advertiser-supported television today, why is Samantha Bee uttering the c-word in a poorly written joke suddenly a concern for you?

content issues, politics, tv
5 comments about "In World Without Limits, Boundaries Are Impossible To Define".
Check to receive email when comments are posted.
Read more comments >
Next story loading