Powerade Brings 'Some Kind Of Power' To FIFA 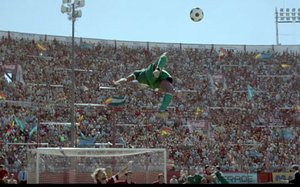 Powerade is extending “Some Kind of Power,” its new creative platform, to its FIFA World Cup official sports drink sponsorship.

The campaign — the latest under the brand’s “Power Through” umbrella platform — was launched in March during the First Four NCAA Men’s Basketball Tournament games.

The new 30-second spot, like that first one, features an older bodega owner imagining what he could have achieved in sports, if only he’d had Powerade to fuel him back in the day.

But in this version (below), instead of daydreaming about basketball, he conjures up a vision of himself being so unstoppable at soccer that “they’d have made a movie about me.”

In his mental “replay,” his younger self would have pulled off reality-defying moves like launching himself into the sky to intercept a ball (above).

The new ad, in English- and Spanish-language versions, will be aired on Fox and Telemundo, respectively, during coverage of high-profile FIFA match-ups.

The campaign, which also includes online, digital/social and retail elements, is from Wieden+Kennedy Portland.

In addition, the Coca-Cola brand is running a “World Cup Bracket Challenge.” Fans can find unique codes on Powerade bottles that they can scan with their phones or enter in a promotional site. If the round of 16 teams associated with their codes advances to next rounds, participants can win prizes such as a pack of Powerade, a $10 Amazon gift card, $20 toward soccer gear, or an ultimate prize of a trip to a U.S. Men’s National Team soccer game or a gaming console and chance to win an EA FIFA Sports ’18 +upgrade.