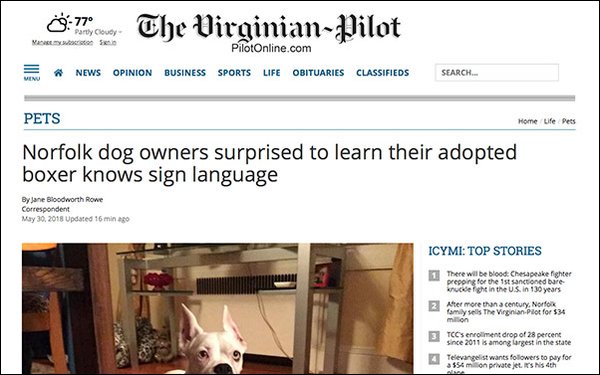 Chicago-based publisher Tronc has acquired The Virginian-Pilot for $34 million.

The largest newspaper in Virginia, The Virginian-Pilot was previously owned by the Batten family in Norfolk, VA for over a century.

“In order to most effectively continue its important work, The Virginian-Pilot must have the benefit of the resources of a large organization,” stated Rusty Friddell, executive vice president and general counsel of parent company Landmark Media Enterprises.

“Tronc brings the scale and commitment to best serve our important mission,” he added.

The sale to Tronc includes the newspaper’s headquarters in downtown Norfolk, its printing and distribution facilities in Virginia Beach and a number of offices in Norfolk and North Carolina.

The acquisition also includes Inside Business and Style Weekly.

Tronc owns the nearby Daily Press in Newport News; adding The Virginian-Pilot to the publisher’s portfolio means some integration of the two papers will likely occur.

According to a Virginian-Pilot article, Tronc executives told staff in a meeting that the company would study how to integrate The Pilot and the Daily Press’ operations over the next 45 days. That likely includes a centralized design hub for the two publications, and sharing of content.

The Tronc executives said the two organizations would remain independent.

The company has downsized about 100 people in the last year and has an estimated 475 employees.

If the newspaper had been sold a few decades ago, he believes it would have been worth “10 or 15 times” what it is today, the Virginian-Pilot article reported.

The decline of newspapers, Batten said, is “a huge source of loss, I think, for this country.”