There Are Some Things More Important Than Nielsen Ratings 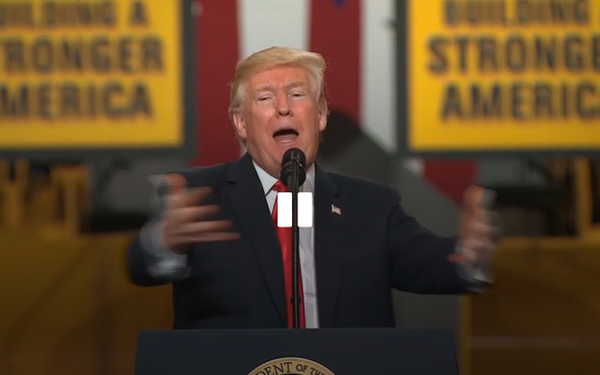 One of the most surreal parts about this surreal period in American history is the outsized importance Nielsen ratings have had as a barometer of political success. It is the thing that most makes me feel like we are all part of a tail-wagging-a-dog scripted reality TV show called “The Trump Presidency.”

And just the way he lied and spun the Nielsen success of his actual TV shows -- “The Apprentice” and “Celebrity Apprentice” -- he began doing the same from day one of his Presidency, claiming falsely that his inauguration was the highest rated ever. It ranked fifth among recent Presidential inaugurations.

He doubled down asserting his first State of the Union Address was the highest rated ever. It ranked eighth among the last 25.

There were even times when Trump has seemed to conflate TV ratings with presidential approval ratings, because that is how ingrained Nielsen success must be in his head.

It was evident in the glee with which he trumpeted the ratings success of ABC’s reboot of “Roseanne” during a Trump rally on March 29 in Richfield, Ohio.

“Look at her ratings,” Trump gushed, confiding, “I got a call from [TV producer] Mark Burnett. He did the ‘Apprentice.’ He’s a great guy. He said, ‘Donald, I called just to say hello and to tell you, “Did you see Roseanne’s rating?”’ I said, ‘Mark, how big were they? They were unbelievable. Over 18 million people. And it was about us,” he said, extending his arms in an inclusive gesture to his audience.

At least in that case, Trump wasn’t lying. “Roseanne” did score bigly in the Nielsens. But as events of the past 48 hours have shown, there are some things more important than TV ratings success.

ABC’s decision to cancel “Roseanne” -- and forfeit tens of millions in potential advertising revenues -- proves it.

It was striking that the move, made in response to a racist tweet “Roseanne” star Roseanne Barr made, came on the same day that Starbucks shut down its entire chain for racial sensitivity training following an incident in which one of its stores ejected patrons simply because they were African Americans.

It seems corporate America is willing to take a stand that elected America won’t: standing up for real American values. You know, the one that started America in the first place: We were all created equal and have the same rights to life, liberty and the pursuit of happiness.

Kudos to ABC for standing up to that, regardless of the value Nielsen ratings.

Interestingly, in another politically controversial TV personality story, Nielsen reports that Fox News’ “The Ingraham Angle” is up 16% in its ratings since the show’s host, Laura Ingraham, took a shot at Parkland high-school massacre survivor David Hogg on Twitter, which led to an ad boycott and a brief hiatus for her show.

The irony is that the notoriety surrounding Ingraham and Barr likely are factors boosting their ratings, but it doesn’t mean viewers necessarily like them, or that advertisers should be sponsoring them. It could just be that people are drawn to train wrecks wherever they happen, even on prime-time TV.

There are some things that are more important than Nielsen ratings.

advertising, broadcast networks, politics, tv
1 comment about "There Are Some Things More Important Than Nielsen Ratings".
Check to receive email when comments are posted.
Next story loading