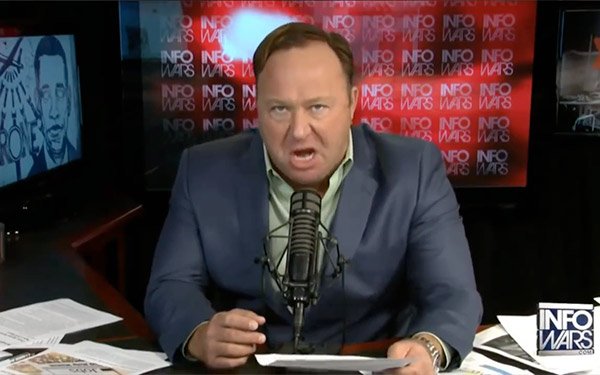 Earlier this week, The New Republic published a story called “The Legal War on Alex Jones,” outlining the many ways the right-wing radio host and other media outlets have reshaped the media landscape by propagating conspiracy theories.

In some cases, they have used the law to stake their claim.

The story also highlights the human toll taken by the spread of conspiracy theories. The piece follows the case of Brennan Gilmore, a State Department employee. Brennan was in Charlottesville, Virginia, last summer taking part in an anti-racism protest when Heather Heyer, another protester, was killed by a car. Nineteen others were injured.

After some hesitation, Brennan, who had recorded the incident, posted it to the internet. From there, his life became a terrifying ordeal. His family members were doxxed and now, when he searches for his name, he finds links to stories claiming he had previously been in Africa “orchestrating genocide” before he used those skills in Charlottesville.

Brennan stated in TNR story: “It’s really concerning as someone who witnessed the horror in Charlottesville that people were doing this in a very cynical and calculated way because they didn’t like what my video showed. This is the tried-and-true tactic of these types of people to undermine the credibility of a witness, when what that witness is testifying to goes against your political objective.

"We saw the natural conclusion of white supremacy in the streets of Charlottesville and they didn’t like that. They wanted to just wipe the story away.”

What’s also concerning is how often these far-right conspiracies make their way into the mainstream. The President and his son, Don Jr.,  tweet links from conspiracy stories. The White House granted credentials to a Gateway Pundit reporter. Alex Jones himself helped spread the false Pizzagate conspiracy theory, which led to an armed gunman shooting up pizzeria Comet Ping Pong in Washington, D.C. The shooter demanded the release of child-abuse victims he heard were being held hostage.

The media cycle doesn’t help, as outlets are more polarized and greedy for audiences.

As fake-news conspiracy stories find their way to Alex Jones’ InfoWars platform, the very laws put in place to protect the press from government intrusion is helping to defend them.

According to The New Republic, the “actual malice” benchmark, first established in 1964 during a civil-rights case, New York Times Co vs. Sullivan,, is now the major hurdle people like Brennan must jump before legal action can ensue. (The case concerned a group of black clergy members who placed an ad condemning violence against black citizens in the South.)

As extreme political ideology becomes normalized, so will the use of the law to spread hate and unleash violence.