2018 EFFIE Award Preview: Her Story Is Our Story: The Laws of Gilead

As a sneak peek at the 2018 North American Effie Awards, MediaPost and Effie Worldwide have once again collaborated to showcase some of the winning cases that will be awarded gold, silver or bronze Effies at the gala tonight. This series focuses on learning and best practices from the media-focused categories. Effie Awards are known by advertisers and agencies globally as the pre-eminent award in the marketing industry and recognize any and all forms of communication that contribute to a brand's success. 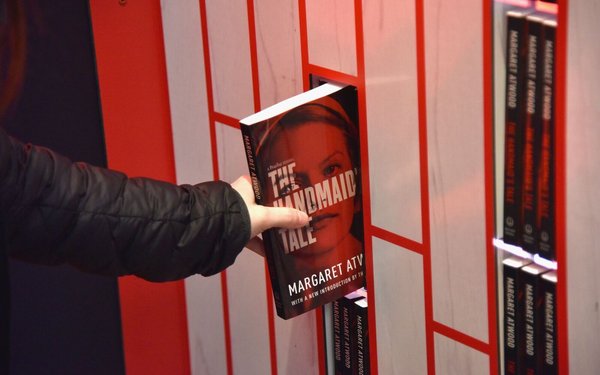 Title: Her Story Is Our Story: The Laws of Gilead

Challenge:Based on Margaret Atwood’s 1985 novel, The Handmaid’s Tale, the narrative is set in a dystopian near-future United States where a religious fundamentalist group has taken control. The fictional world of Gilead is plagued by infertility, and fertile women, called “Handmaids,” are used as breeding stock for society’s elite male commanders. Clothing defines their caste, reading is forbidden and reproduction is their only hope for survival.

The Women’s Marches in January 2017 created a wave of relevant socio-political conversation, with many activists referencing Atwood’s novel. Affinio’s Twitter data revealed that those who had tweeted about The Handmaid’s Tale during the protests expanded beyond fans of the book.

In order to drive cultural conversation, we needed to focus efforts on audiences that would be the most vocal about the show. The marketing challenge was to make The Handmaid’s Tale “the most talked about show of the year.”

Solution: Hulu, UM, Arsenol, Civic Entertainment and Social Code collaboratively sought to contextualize Gilead’s authoritarian restrictions in the context of today by focusing on three laws of Gilead. To ensure authenticity, we chose partners most relevant to each law and asked them to illustrate the impact for their audiences.

Law #1 - Women do not have a voice in society

At SXSW, an army of handmaids wearing long red cloaks quietly roamed the festival, creating a stark visual of a culture where women are powerless.

Partnering with pop-culture powerhouse NYLON Magazine, we hosted an empowerment party and lifted women’s voices through a tweet wall. NYLON custom editorial followed up with actionable ways to fight for women’s rights.

Law #2 - Women are not allowed to read

An art installation composed of thousands of copies of the novel was created in New York City. Geo-targeted social and local DJ promotions encouraged visitors to take a free book, slowly revealing an empowering mural.

Ozy explored the world’s most infamous banned books and projected what America would look like if women weren’t allowed to read.

Law #3 - Women must wear the color of their caste

We partnered with Vogue to host an immersive costume exhibit followed by a discussion with the show’s costume designer. We engaged Vanity Fair to create custom editorial celebrating color as a form of individuality and political expression.

Results:The Handmaid’s Tale broke into cultural conversation with over 1.8B earned social impressions during launch week and reached the highest awareness levels ever for a new Hulu Original series.

The Handmaid’s Tale became the most-viewed premiere of any original series on Hulu.