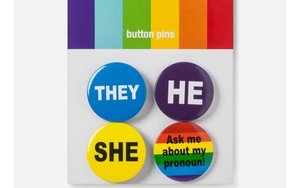 Marketers are gearing up for Pride Month, and this year, expect to see the usual rainbows and lavender unicorns sprinkled with plenty of “he,” “she” and “they.”

Whether it’s Target’s “All pronouns welcome” pins or American Apparel’s “They O.K.,” companies are having a blast helping activists raise awareness about the importance of gender pronouns, while still getting their sparkle on. And while plenty of brands will release ads and products at Pride celebrations throughout the month, it’s always fun to see which are among the first.

Nike is celebrating with the 2018 Betrue shoe, which it says is “reclaiming the past, empowering the future,” using the color lavender and the pink triangle. And Adidas is introducing a Pride sneaker that sports a calmer color scheme, with the Adidas I-5923 in pastel hues.

H&M is introducing its first-ever Pride collection, themed “Love For All.”

Macy’s says it plans to celebrate all month long with its annual Pride + Joy campaign, this year focusing on local colleagues at over 20 Pride parades, as well as a brand-new float. (Like Target and Nordstrom, Macy’s sponsors the Pride march.)

Its Pride fashions include a Kenneth Cole collaboration, Tied with Pride, with gender-neutral t-shirts, hats and socks, as well as its Pride KAM sneaker in black and white, each designed with rainbow details. Other brands introducing Pride merchandise are Calvin Klein, Levi’s, 2(x)ist, Michael Kors and American Rag.

And of course, cities join in, too: This year, Pittsburgh is even rainbow-ifying a police car for celebrations.

While Pride celebrations have been gaining in popularity for decades, they’ve become more enthusiastic in recent years, fueled by both the success of the gay rights movement and pushback from conservatives.

But the events are also approaching a historic moment: This year’s NYC Pride March, themed “Defiantly different,” is the 49th annual event. The route this year is new, a change NYC Pride says is in anticipation of record attendance in 2019, as it celebrates Stonewall 50/World Pride 2019.