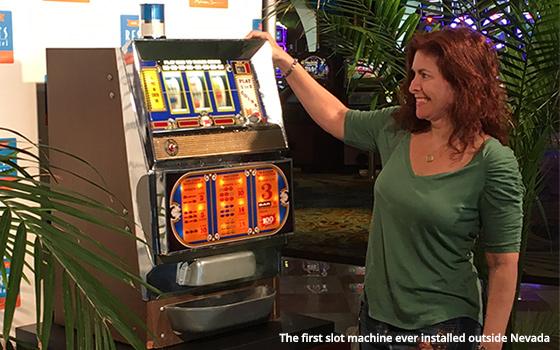 Throughout the summer, creative will roll out timed to specific events, such as Memorial Day weekend festivities that included a massive cake, fireworks, a Beach Ball Drop and inviting guests to win money by pulling the lever of the first slot machine installed outside of Nevada.

These events are highlighted with specially designed logos and imagery that have used to revise the standard Resorts signage to include a banner with 40th anniversary messaging.

"Resorts is really the catalyst for gaming across the nation," says Mark Giannantonio, CEO, Resorts Casino Hotel, explaining that the destination was the first place outside of Nevada to legalize gambling. "This is symbolic for us."

Moreover, with this over-arching historic birthday bash the resort is spending more on marketing than in previous years to help stand apart from rivals.

This summer's media buy will avoid TV "since it is so crowded," says Giannantonio. Also out of the mix: less effective print ads. Instead, Resorts will reach younger guests through social media, including Twitter, Instagram, and its newer push to live-stream activities on Facebook.

One recent event, to the end, showed the Village People placing their hands in cement to become the first group to participate in Resorts’ new handprint wall of fame set to debut in June. The wall will reintroduce 15 older performer handprints while regularly adding newer ones to hopefully serve as non-paid advertisements via viral Instagram posts. The older handprints of popular performers have a history with the property: they were a tourist draw before being removed during the five-year, $110-million renovation of the hotel. Only Frank Sinatra’s original handprint remains visible today.

In addition to social media, the campaign includes OOH and traditional brochures. "Compared to 10 years ago, we are spending a lot more money on direct mail," says Giannantonio, noting that it remains remarkably effective in enticing visitors. To that end, some 100,000 mailers across the entire Northeast are micro-targeted for specific promotions. Loyal members, for instance, may be gifted with rewards, such as Yeti Coolers, if they spend a weekend at the property. New guests are likely to receive more basic information about upcoming performers and on-site experiences, as well as discounts.

Targeted communications play a key role in the property's advertising strategy. Potential visitors are pulled from databases tracked by both Resorts and parent company Mohegan Sun as well as via New Jersey's Casino Reinvestment Development Authority's network. "We're careful about where we spend our money," says Giannantonio.