Dinosaurs In The Front Yard! Digital Decoration Firm Has A Scary Thought 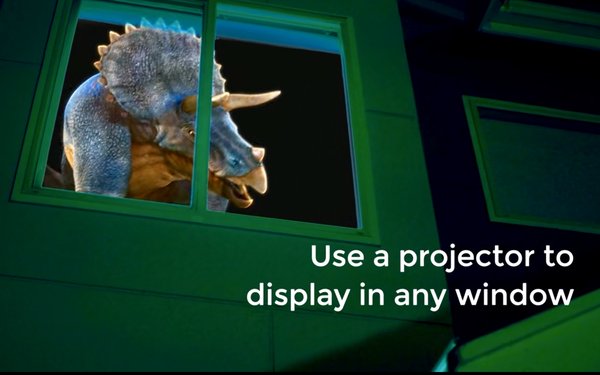 This is going to be an especially great month for dinosaurs, highlighted by Jurassic World: Fallen Kingdom, which premiered in six countries on Wednesday and has its U.S. premiere on June 22. Dinosaur consciousness means it is also the right time for “Dinosaur Encounter,” dubbed the “first-ever prehistoric digital decoration.” It’s available now.

A digital decoration, if you are uncertain, are those animated projections you see plastered on some homes, mainly at Christmas, or Halloween, or at kiddie birthday parties.

AtmosFX is a company deep into making them. “Dinosaur Encounter” is the first digital decoration that AtmosFX has ever made that is not specifically tied to a holiday or other theme like a birthday. It’s a projection of big scary looking dinosaurs — four of ’em — that can be made to look like they’re bopping through your front yard or dining room.

Specifically, the prehistoric pretenders are a Triceratops, a mama Brontosaurus with her baby, a pack of Velociraptors, and the nasty Tyrannosaurus Rex. With the help of an AtmosFX decorating kit and home theater projector, these things could be at your house for dinner or certainly in time for the day the family goes out to see the new movie, and needs a scary end to the evening back at home.

Peter Reichert, an ex-MTV producer who was an executive when “Beavis and Butt-head” came into being, started AtmosFX in 2006 with his partner and fellow MTV alum, Pete Williams. Although Jurassic World has no relationship with AtmosFX, the timing of “Dinosaur Encounter,” Reichert acknowledges in a press release, is “the perfect time to introduce big, high-res dinosaurs that bring the thunder to parties across the country and across the world.”

If things go the way AtmosFX hopes, homes and businesses across America will be doing just that.

“It’s tough to gauge because our benchmark for measuring has always been Halloween,” Reichert tells Marketing Daily. It would seem the closest AtmosFX has come to the dinosaur motif has been a digital decoration that projected zombies, which is popular in the spooky season and, from the looks of it, possibly not very popular with people who get scared by zombies. But the company clearly thinks there’s a market for this. “Add 64 million years of awesome to your next party,” an online AtmosFX ad reads.

Reichert said he and Williams had no idea what the market for digital decorations was or could be when they started a decade ago, but now they claim 300,000 website customers, and sales of the digital downloads reach into the six figures every year. He noticed amping up in the business seemed to have started about three years ago.

The creations are available through their company at a higher technical quality, or a lot less through licensing deals AtmosFX has with producers who peddle to big box stores. (“Dinosaur Encounter” can be downloaded for $34.99.) AtmosFX is also pursuing its own licensing deals so it’s working to make official movie tie-ins a part of the business.

Marketing “Dinosaur Encounters” will happen mainly through its website, where it offers party tips, too (like making a dinosaur centerpiece out of a watermelon), but also with help from online influencers, who often post their scenes online. “Dinosaurs are popular everywhere,” Reicher says. “There are no boundaries, no countries. It definitely has a lot of potential.

“What’s great about ‘Dinosaur Encounter’ is that it’s made to be projected onto walls or in a window as a realistic illusion. The dinosaurs look at you, as if you're in their space, creating a unique experience that’s technically very easy for people to set up.”