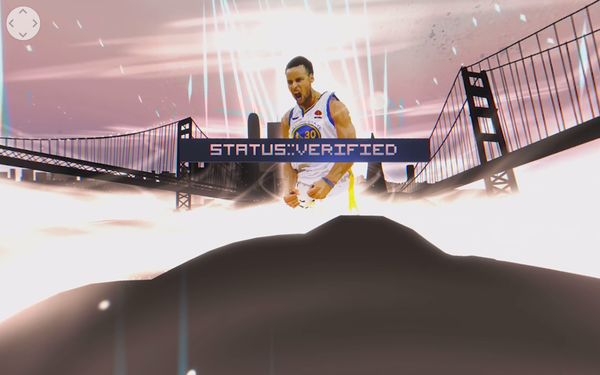 Oakland may still be sweeping up the last of the confetti, but Under Armour and Golden State Warrior fans are a long way from being finished reveling in their championship.

On the heels of the team’s win over LeBron James and the Cleveland Cavaliers, Under Armour toasted the town with a pop-up shop, including “Steph VR,” which brings the win to life via Samsung Gear VR powered by Oculus. Using 360-degree VR, painted with Google Tilt Brush, it brings viewers “into Stephen’s operating system and through his journey to becoming “Verified.”

While Oakland can’t get enough of Curry, who further charmed the California city by ditching his security detail and dashing into the parade crowd, as well as taking his whole family to Oakland’s favorite taco truck when it was all over, plenty of non-Oakland fans are sick of him.

So Under Armour had a spot celebrating “Curry Fatigue” ready to go the moment the final buzzer sounded, addressing everything Curry foes love to complain about–his singing Disney songs on Carpool Karaoke, trademark shimmy and those relentless three-pointers. “Ignore the hate,” it tells fans. “Keep doing you.”

Under Armour, which has been struggling of late with falling sales, widespread layoffs and a general inability to keep up with rivals Adidas and Nike, may be regaining its footing. Besides the Curry craze, its new Project Rock 1 collection, featuring Dwayne “The Rock” Johnson, sold out in a half hour.

But many observers aren’t convinced Under Armour is quite ready for a comeback, despite revenue gains and the revelation that sales in North America slipped just 0.4% in its most recent quarter, a better performance than was expected. Calling the results “solid,” Deutsche Bank analyst Paul Trussell nonetheless notes plenty of potential risks in a recent report.

Those include “lost shelf space in U.S. sporting goods stores, fierce brand competition for the consumer’s attention and wallet, and execution risk of strategy both domestically and internationally,” he writes, “and perhaps most importantly, the need to create product that is functional while also resonating with consumer from a fashion standpoint.”