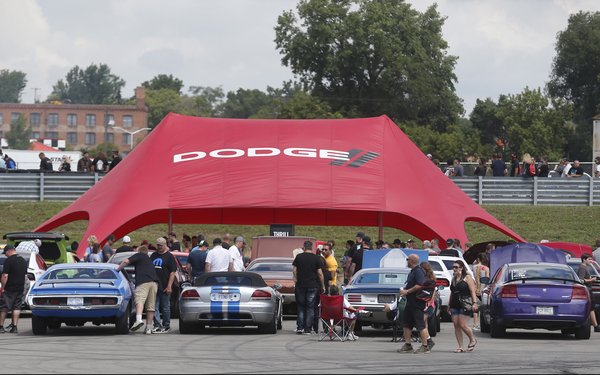 Dodge is bringing back its popular legal drag racing event for a fourth year.

Motor Trend and the Fiat Chrysler Automobiles brand host the event as the kickoff to Detroit’s week-long celebration of classic cars and car culture during the Woodward Dream Cruise, which attracts tens of thousands of auto enthusiasts from around the world.

The Aug. 11 event will be bigger than past years in several ways. It is produced by Roadkill, a brand of Motor Trend Group, with a show that delivers a one-of-a-kind taste of "Automotive Chaos Theory" on the Motor Trend App and Velocity network.

Featuring two classes for drag racing this year, Big Tire and Small Tire, a cash purse of $30,000 is up for grabs. As part of the overall $40,000 purse, the largest cash purse ever offered at “Roadkill Nights Powered by Dodge,” an additional $10,000 will be awarded to the celebrity showdown race winner’s charity of choice.

“Roadkill Nights gets people on to a track run by professionals, so they can really show how their hot rods perform in a more controlled environment,” Beahm says in a release.

There also will be more celebrities participating in showdown races and the addition of freestyle motocross exhibitions at the 2018 event, including Leah Pritchett in her Dodge/Mopar Top Fuel Dragster and Matt Hagan in his Dodge Charger Funny Car.

“Roadkill Nights not only brings ‘Roadkill’ to life, but also allows our fans to appreciate firsthand the thrill of top- speed drag racing,” Freiburger said in a release.  “The event has something for everyone. Whether you’re a drag racer, car enthusiast or looking for a fun day to spend with family, Roadkill Nights promises a dynamic experience.”

Full details for spectator tickets, show ‘n’ shine registration, participant registration for drag racing, and an extensive range of packages are available now at roadkill.com/nights. Fans can follow the action for Roadkill Nights at hashtags #RoadkillNights and #poweredbydodge.